Murder at the Opera by D. M. Quincy 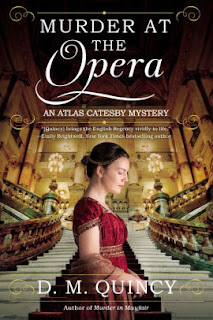 At last! At last a new Atlas Catesby mystery from D.M. Quincy, and, at last, a series I've read from the beginning. If you enjoy atmospheric historical mysteries set in the early 19th century, mysteries that beautifully set the scene while introducing characters from all walks of life, I suggest you start with the first in the series, Murder in Mayfair. However, this time, I was ready for the further adventures of Atlas Catesby and Lady Lilliana Warwick in Murder at the Opera.

Catesby was just putting Lady Lilliana into the coach after an enjoyable evening at Covent Garden when they hear a cry of murder. He ran to help, finding a small crowd surrounding the body of a woman. She had been shot in the face, and a nearby fruit vendor witnessed the shooting, saw the killer, and retrieved the pistol. When Catesby hurried to the inn where the inquest was to be held, Endicott, a shrewd Bow Street runner, informed him that Mrs.Wendala Pike was the victim, a woman who was notorious as mistress to a wealthy nobleman. The wealthy nobleman? Catesby's former brother-in-law, the Marquess of Vessey.

From the time he was a boy, Atlas has hated Vessey. He blames him for the death of Vessey's wife, Atlas' sister, Phoebe. She fell down the stairs, but Atlas is sure that Vessey pushed her. Now, he learns that Mrs. Pike has been Vessey's mistress all these years, even before Vessey and Phoebe were married. Atlas vows to find Mrs. Pike's killer, even, and especially, if it is Vessey. He's only confused when Vessey shows so much sorrow and utters a cryptic sentence when he sees Mrs. Pike's body.

Together with Lady Lilliana, and the assistance of his valet, Jamie, Catesby questions his way through 1815 London. Gunsmiths, young bucks, fruit vendors and those involved in the theater all provide pieces for Catesby's latest puzzle. Although his nephew begs him to prove Vessey's innocence, Atlas is determined to find the truth at all costs.

Quincy's latest mystery is a fascinating puzzle with intriguing characters. She excels at the polite rituals of society, even as Catesby and Lilliana break rules. Family relationships, romances, and friendships take center stage in Murder at the Opera. The book brings a couple storylines to a head for those of us who have read the series. Readers won't be disappointed at the latest developments, although the solution to the mystery itself may come as a surprise. In fact, some of us will be delighted at the new puzzles awaiting Atlas Catesby.

I'm in the hold queue at the library for this one--can't wait!

I loved the first two books and was sad when I came to the final page each time. Not yet available in my library - so either I will wait until it is available or buy the Kindle copy for $9.99. Your reviews give all of us such a wonderful variety to put even more books on hold.

Be great if D.M. wrote this series a bit faster.

Netteanne, I'm going to keep my fingers crossed that there are more books in the series. I talked to D.M. in Dallas, and she said she isn't sure the publisher will pick up more. In case they don't, though, she did tie up a loose end that I know we all wanted to see. Can't say more. I don't want to spoil the book for you.