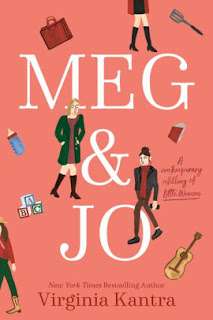 If you've never read Louisa May Alcott's Little Women, and you intend to, stop right now. With Meg & Jo, Virginia Kantra succeeds brilliantly in bringing the book into the 21st century while maintaining the spirit of the characters. There's still "reliable Meg", "independent Jo", "stylish Amy", and "shy Beth". But Kantra answers those questions that young girls don't understand. NOW, I know why Jo rejected Laurie and picked Professor Bhaer. I always thought Meg was a goody-two-shoes. In Meg & Jo, they both get to tell their stories, and Kantra clears up a couple other issues I always had with the earlier book. And, she's going to round out the story in a forthcoming novel, Beth & Amy.

"Christmas won't be Christmas without any presents." Sound familiar? The March sisters and their mother have moved into an old farmhouse in Bunyan, North Carolina because their father is in Iraq as an army chaplain. They moved from the pastor's house, and now their mother has made the transition to a goat farmer. The story opens as they eagerly await a call from their father in the prologue to the story.

When Jo tells her story, though, she's 28, living in New York City. She hoped to be a writer, but was laid off at a newspaper, and she's now a prep cook at a restaurant, and a food blogger. Although her best friend, Theodore Laurence III (Trey), has insisted he loves her, Jo knows she doesn't love him. She wants to be independent, and write books. In the meantime, she secretly writes a blog called "Hungry", and admires her boss, Eric Bhaer, a chef who is passionate about serving people.

Meg is living the life she wanted, married to John Brooke. They have twins, and she quit her job at the bank to stay home with the children, so John was forced to give up his teaching job and work for Trey's grandfather at his car dealership. Meg knows she should be happy, but when their mother ends up in the hospital, she takes on the role of caretaker of the farm. For Meg, life is all about responsibility and not asking for help.

Do you sense dissatisfaction here? While Amy is off in Paris on an internship with Louis Vuitton, Beth is in Branson, performing in the chorus of a show. By the time they all come together back at the farm for Christmas, Jo and Meg and Mrs. March will have made some major changes in their lives. Satisfying changes.

I loved Little Women. I cherish the book, and several gifts I've received from my mother that are related to the book. I've seen the play. I'll be going to this year's Christmas movie, Little Women. However, Virginia Kantra did a wonderful job updating the story. I fell in love with Eric Bhaer, which is good because Jo will always be my favorite March sister. I cheered for Mrs. March who finally stands up to her husband. And, Meg's life changes. If you were young, as I was, when I read Little Women, Meg & Jo puts the entire story in perspective.  It's the best compliment I can give to an update to a classic to say this was satisfying.

*****
FTC Full Disclosure - I received the book from the publisher after I agreed to review it, with no promises as to a positive review.

Jackie is a big fan of Kantra's North Carolina series (and LITTLE WOMEN), and asked me to reserve this (on Cloud Library) for her.

Lesa, I think this sounds like fun and I love how the author has updated that classic. So many I think don't find the original all that wonderful these days. I will admit that it has been a long, long time since I reread it. Maybe I'll just get this one at the library and try it. LOL

I'll be interested to see what Jackie thinks. You'll have to let me know, Jeff.

I think she's done a great job updating it, Kay. And, you'll feel as if you're sucked in with the opening. I hope you enjoy it!