Have You Heard? Donna Andrews' The Real Macaw

I was in St. Louis Friday and Saturday. I'm looking forward to sharing the pictures, but I didn't have time yet, so I'm pleased Sandie Herron has stepped up with a review of Donna Andrews' audio book, The Real Macaw. Thank you, Sandie. 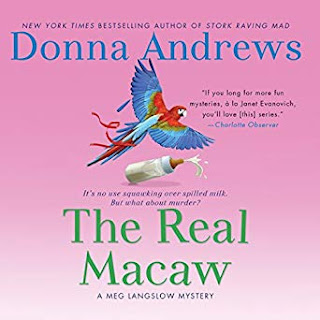 Since the last Meg Langslow mystery, Book 12, STORK RAVING MAD, Meg had her twin babies, boys Josh and Jamie.  Meg is feeding them one evening when they are 4 months old, and she begins to hear animal noises. She trecks down the stairs in her and her husband Michael’s large Victorian home, only to spy her father, her grandfather, and her brother shepherding in all sorts of cats, dogs, gerbils, guinea pigs, birds, and one macaw with quite the vocabulary into her living room!  They explain that with the dire financial straits the town of Caerphilly, Virginia has gotten itself into, the shelter has had its no-kill policy rescinded. In order to save all the animals, the men of the Langslow branch of the family joined forces with the Corsicans (Committee Opposed to the Ruthless Slaughter of Innocent Captive Animals) to save them all. The original plan was to have Parker Blair pick everyone up and then deliver to various people who volunteered to foster them.  But Parker never showed up. Meg keeps calling his cell phone to make sure he’s OK, and Chief Burke arrives, holding Parker’s phone and asks Meg why she keeps calling a dead man.

Meg doesn’t need more residents in her home, so she insists that all the animals be moved to the barn.  However, her brother Rob has a team of testers from his computer gaming company testing a new game in the barn.  The Corsicans hold their meetings in the barn as well, with many of the animals being adopted on the spot. Even Rob falls in love with a particular dog.

Rumors fly about who might have killed Parker, since he had many girlfriends in town, some wildly jealous of each other.  Rumors are also flying that the mayor has mortgaged the town, and a development company will seize the property of several citizens including Meg and Michael, Meg’s father, and others, in order to construct a golf course that would profit the town.  First, however, comes the solving of the murder and burying Parker. His closest friend needs help finding the best clothes to bury Parker in and enlists Meg’s help. While Meg is ostensibly looking for clothes, she searches Parker’s home and files. Meg discovers that Parker has proof of what the Mayor has done to the town!

While rumors fly, confirmation comes next, and chaos reigns, as always.  Donna Andrews can make all the mayhem seem like it’s supposed to happen in the Langslow home and spill in Caerphilly while treating us to many laugh-out-loud moments as we watch.  The murder is solved, but not in any way suspected at the outset of this caper. Plotting was enjoyable, steady, and not rushed. I think Donna Andrews is getting even better at this!
Posted by Lesa at 3:00 AM

You're very welcome, Lesa. Hope you had a great trip!