Have You Heard? All the President's Menus by Julie Hyzy

Although I mentioned I was going to be on vacation, that doesn't mean I've had time to finish a book yet. Thank you to Sandie Herron for stepping up with an audio book review. Today, it's All the President's Menus by Julie Hyzy.


All the President’s Menus 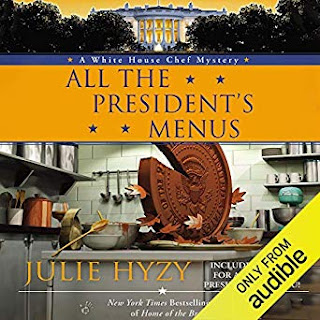 White House Chef Olivia “Ollie” Paras is bored.  The government is under sequester which means no state dinners, practically no guests, and not much more to do than the first family’s meals.  Chief Usher Peter Sergeant visits Ollie in the kitchen to tell her that a visit from four chefs from Saardisca planned over a year ago will still occur, with the chefs arriving shortly.  Their visit coincides with a visit from Saardisca‘s female presidential candidate.

Four big men are escorted into the kitchen.  They do not pay attention to Ollie who is welcoming them to the US.  When her first assistant, Bucky, speaks up, they stop talking among themselves.  Ollie knows this will be a difficult experience, especially if they view women as inferior.  A trip to the pastry kitchen to meet Marcel ends in disaster when Marcel faints from a double dose of medication, breaking his arm in the fall.  With Marcel hospitalized, Ollie turns to the foreign chefs to help out. All they want to do is work. They do not believe this little kitchen has served hundreds of people at once.  They have been taught it is all propaganda.

Marcel returns, so the men visit the chocolate shop with him, and again Marcel collapses.  As the Saardiscan chefs return to the kitchen, two fall ill, and one chef dies! Just what was in that chocolate drink they all shared?  Ollie insists the chefs speak English since she has a bad feeling about what they are whispering. Ollie’s request for a translator posing as a new chef is grudgingly granted.  The woman fumbles her way through part of the day until she goes pale listening to what the chefs are saying and refuses to stay. Ollie sneaks in a tape recorder to catch some of those conversations and takes them to the translator at home.  On the way, however, Ollie is followed and threatened, yet she makes it to the translator’s home just in time. They call the police and review the tape. The translator confirms Ollie’s suspicions that they are planning an attack. Two men wearing panty-hose masks burst in.  Was this part of their plan? Saardisca had already sent the chefs’ boss to keep an eye on them. Would he help pick up where the others left off?

This eighth entry in the White House chef mysteries was just as taut and engrossing as the earlier entries.  Even with Eileen Steven’s excellent narration, I had some difficulty understanding the heavy accents of the Saardiscan chefs even while speaking English.  I found this annoying, but then perhaps that was the point, since Ollie was just as frustrated. The Saardiscan view of America compared to their country was so skewed that I began thinking of the world as it exists today. The entire series has brought the reader almost too close to the real world, which is part of what creates the believable tension that kept me reading way too late into the night.  Definitely recommended.
Posted by Lesa at 3:00 AM

I just finished Black Chalk, a 2015 twisty thriller set at Oxford University and written by Christopher Yates, an English puzzle writer. Not my usual type of read but well done and It was fun to try something new.

An English puzzle writer? That's interesting in itself, Laurie.