Checked Out by Elizabeth Spann Craig 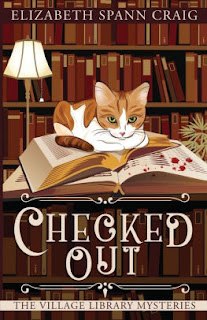 While I've been known to complain about the amateur sleuths in cozy mysteries who ignore their jobs, I don't have that complaint about Ann Beckett in Elizabeth Spain Craig's Checked Out. The librarian does her job, shows up early, works late, and asks her questions on her lunch hour. Well, occasionally she talks to people at the library. Why would she suspect that a little research would put her in danger?

Most librarians don't have to rescue drowning cats from culverts, though. When two young boys report cats caught in the culvert during a rain storm, Ann's the one who crawls on her belly to save the mother and son. And, that little orange boy who wouldn't leave without his mother is a hit with the library staff and patrons. Ann's appearance isn't such a hit. Her director reminds her that she has a date that night, and really should go home and change. The library patrons in Whitby, North Carolina are a little too eager to fix Ann up. This time, her blind date is with the great-nephew of one of her patrons.

When Ann arrives at Roger's for dinner, there's no answer at the door, but she does smell the grill. Around back, she finds the murdered body of her date. Fortunately, the new police chief believes her. Ann Beckett really doesn't have a reason to kill a man she never met. But, she's a librarian who grew up on Nancy Drew books. She uses her involvement in finding the body as an excuse to ask questions and do some research.

There are so many reasons to like the first book in Craig's first Village Library Mystery. Let's start with those cats. They're adorable. Then, there's the amateur sleuth. Ann Beckett is a librarian, and Craig does an excellent job in depicting the library and all of the behind-the-scenes preparation. The library has a well-balanced, interesting staff. (Or, at least, as a librarian I found them that way.)  Best of all, Ann isn't involved in a romance or a romantic triangle by the end of this first book. In fact, she has reasons to be a little gun-shy when it comes to her personal relationships. And, of course, the murder of her blind date doesn't help.

If you enjoy Jenn McKinlay's Library Lovers Mysteries or Miranda James' Cat in the Stacks ones, featuring the cat named Diesel, take a chance on a new librarian in town, and a cat or two. Try Checked Out. (I so wanted to say check out Checked Out, but I'm sure someone already has.)

*****
FTC Full Disclosure - I don't remember how I received this book, but the author probably sent it to me.
Posted by Lesa at 3:00 AM

I found it at my Brooklyn Library.. I put it on my "To Be Read List" since I've already reached the max of ten holds on BOTH accounts. LOL

No joy at my local library at this point.

If the cover art didn't grab me, your review did. I'll be looking for it.

It's not yet at my library, but Checked Out by Elaine Viets is!!!

And, I have a copy of Checked Out by another author as well. It's in a pile, and I don't remember who the author is.