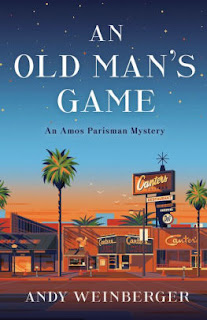 It's sort of disturbing to realize Amos Parisman, a retired PI in Los Angeles, is only a few years older than I am. He was a Marine in Vietnam, then a private investigator for forty years. He and his wife, Loretta, are aging in a retirement home when he's called out of retirement in Andy Weinberger's debut mystery, An Old Man's Game.

Howie Rothbart, president of the Board at Temple Shir Emmet, wants Amos to look into the death of their rabbi. Amos reminds Howie that he's retired, and isn't an observant Jew, but Rothbart doesn't care. Ezra Diamant died over lunch at Canter's Deli. Although the police say it was a natural death, and the rabbi smoked and was overweight, the Board wants reassurance. Their rabbi was charismatic and forceful. He made headlines. And, he stirred up trouble.

It's Amos who actually stirs up trouble with his questions. Two people end up dead who were connected to the rabbi. Amos finds a bullet on the hood of his car. Even Parisman's friend, Lt. Bill Malloy, thinks Amos might be on to something. It's time for Amos to have protection, though. He turns to Omar Villasenor, a thirty-year-old Mexican who credits Parisman with keeping him out of jail. The big man is intimidating, but gentle. He'll do to watch Amos' back.

Amos is definitely the star of this mystery. He's quiet and unassuming, a man who loves his wife who is slipping into dementia. His observations about Judaism, and the sermons written by the rabbi, are fascinating. He's just going through the motions of life, one step at a time, until the case comes along. In fact, in observing his retirement, he says, "It's not retirement exactly, more like the system is quietly shutting down on its own." There's his comment, "Depression, followed by the triumph of the human spirit? Hey, that's me in a nutshell."

Looking for a PI with the wisdom of his age? That's Amos Parisman. I hope the kind, thoughtful PI returns to show readers that criminal investigation really can be An Old Man's Game.

Sounds interesting. There have been at least a few other "older" PI stories over the years, like those about "Deets" Shanahan, the Indianapolis PI, by Ronald Tierney.

This sounds interesting but my library doesn’t seem to have it. I might have to wait until the new year and try requesting it.

Are these retired PIs my age, Jeff? (smile)

it was interesting, Sandy. Good luck!

No joy at my library either right now.

By the way, this sort of deal must be hot again as there have been a flood in the last six weeks of review queries for such mysteries since just before Bouchercon. All of them have been self published--indie-- folks.

I've received a bunch, too, Kevin. That one, though, was sent by LJ. Once I get through my titles for LJ each month, I'm usually ready for something different.

LJ has no knowledge of my existence. ;)

I think he is younger than I am, but not by much. My library doesn't have it either and I tried statewide. It is a book I want on my list though. Thanks.

My library does have a copy and I reserved it. They still do NOT have the new Jeffrey Siger/MYKONOS MOB book, so looks like I will have to buy the Kindle edition.

Sounds great! I'll have to look out for it at the library.

More and more I am attracted to characters who are older.