Donna and I have been friends long enough now that we no longer give each other "things" as gifts, unless they mean something. Instead, we try to do something together so we can share a memory. This year, Donna gave me a trip to St. Louis.

It all started with The London Tea Room. I had been there earlier this year with a friend, Kathy Boone Reel, when author Deborah Crombie appeared there. But, a couple days a week, they're doing a Christmas tea now. So, our first stop in St. Louis was the tea. What a treat! It was so relaxing. Just soft conversation in the room. A Christmas tree. My first Christmas cracker! The crowns were inside the crackers. Two pots of tea per person, and a delicious tier of sandwiches, scones made right there, and pastries. You can see how beautiful it all was. 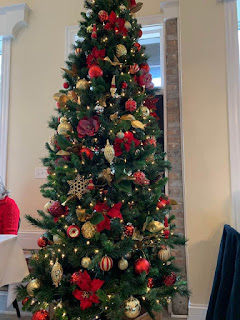 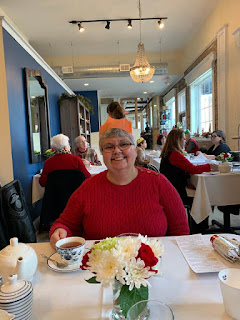 Before checking in at our Bed & Breakfast, we stopped at the St. Louis Public Library. Neither of us had ever been there. But, because a man at the front desk suggested we take the one-hour tour, we decided to go back the next morning instead of rushing through on our own.

If we're anyplace near the theatre district in St. Louis, we stay at Grand Center Inn. The bed-and-breakfast is just perfect for us, and it's within walking distance of the Fox Theatre and a number of small venues.


On Friday night, we walked down to the Grandel Theatre. We had dinner reservations at The Dark Room, the bar and restaurant in the building, and there was a wonderful piano player.


Then, we walked across the lobby to the theatre itself to see the Metro Theater company perform "It's a Wonderful Life". It was "a reimagined version", just an hour long about a radio station in which the cast of the broadcast of "It's a Wonderful Life" all succumbs to food poisoning. Everyone, from the announcer to the receptionist to the cleaning lady put on the show, and they even recruit a deliveryman to play George Bailey. It was so much fun, with a marvelous cast.

Saturday morning, we headed to the St. Louis Public Library. They have several one-hour tours on Saturdays. The docent told us all about the history of the library, which was unusual because it was a Carnegie Library, and Andrew Carnegie seldom gave money for a large building. He gave money for small neighborhood libraries. This one was built in 1912, and closed down for two years and renovated just a few years ago. It's beautiful, and they used artisans from the St. Louis area for the renovations, including one company headed by the third generation of artisans. Ceilings, stained glass, lighting. As Donna said, this library now has the best lighting of any public library we've been in. 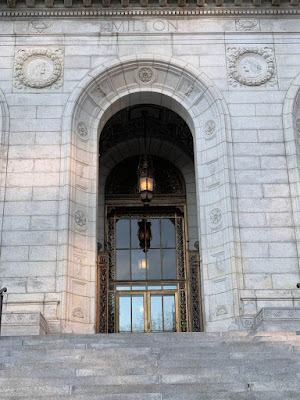 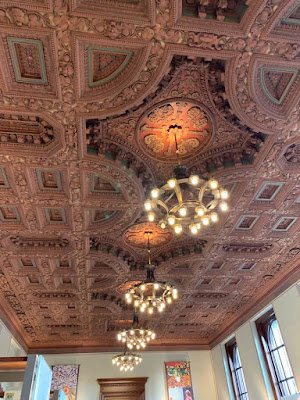 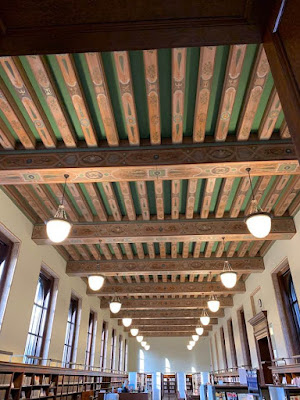 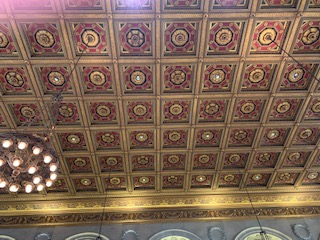 Once the tour was over, we went outside to see a sculpture, "Mariposas", meaning Butterflies. It was done in 2015 by Manola Valdes, and it's on loan to the library. The butterflies look different, depending on how the sun shines on the wings. 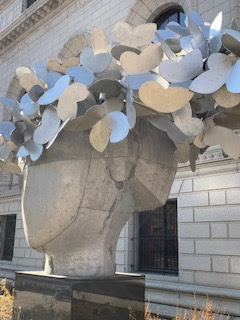 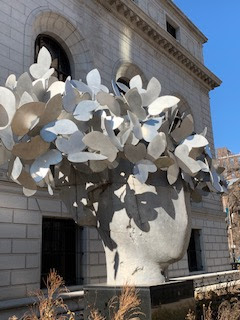 (And, I had to take a couple pictures of Christ Church Cathedral across the street, because of the gargoyles.) 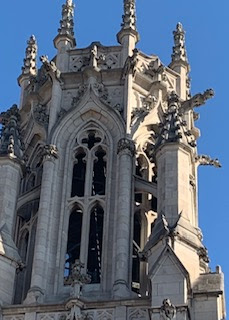 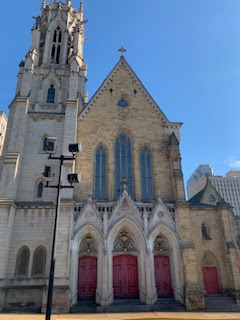 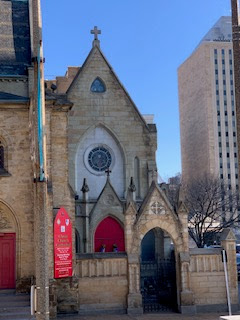 Donna's Christmas gift was just perfect, an experience and memories to share.

Wow! What a trip! What architecture. What fun. Great gift!

Wasn't that a great gift, Sandie? I agree.

Tea looks like a wonderful treat. I always love to see pictures of libraries and this one was terrific. Thanks for sharing.

Have you ever been to the Carnegie Library in Pittsburgh PA- the main library in Oakland? It is fabulous.

My pleasure, Gram! Tea was wonderful, as was the library.

I have not been to the Pittsburgh Library, Netteanne. I'll check out the website. Thank you!