The October Man by Ben Aaronovitch 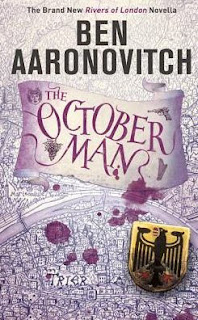 Ben Aaronovitch's urban fantasy series, Rivers of London, is set in England, as the name implies. However, in his novella, The October Man, he introduces a new set of characters, and places them in Germany. I'm hoping that Winter and Sommer from this book, and Peter Grant from the others, will eventually work together. However, let's face it. If they have to do that, the magical problem, "the infraction", might be so big the world could end.

Tobias Winter is an investigator for Abteilung KDA, the branch of the German Federal Criminal Police that handles the supernatural. When a body is found in Trier, Germany's oldest city, Winter is sent to a vineyard. The man's body has been declared a biological hazard, and something fuzzy is growing all over it. It's Vanessa Sommer, the liaison to the Trier police who recognizes the fungus as "noble rot" used in wine production. Although she's amazed to learn Winter can actually do magic, and she has a number of questions, she's always cool under pressure.

In this case, Winter and Sommer do have to remain cool. They'll have to deal with the spread of "noble rot", two bodies, and two river goddesses. Kelly, goddess of the river Kyll, has a story of love lost and a villain destroyed. However, centuries later, there may be a connection. It's going to take Winter, an apprentice, and an ambitious, but untrained police officer, Sommer, to face down a practitioner of magic.

As always, Aaronovitch brings dark humor to the alternate reality he has created. In fact, he mentions that humor that often comes with police procedurals, that "habitual mantle of light-hearted cynicism that is the birthright of every well brought up police officer". That's why I'm drawn to good police procedurals, or, in this case, an urban fantasy that combines the best features of a police procedural with a fantasy world.

In Aaronovitch's world, his police officers trained in magic still deal with the repercussions of World War II. And, the past is still influencing the present. There is still talk about Nazis, and the loss of the lives of practitioners of magic. And, they still deal with prejudice and racism, as Winter's boss indicates in a very pointed speech. No matter how many nonfiction books are written about our times and our atrocities, sometimes, novelists do a better job pointing out the problems. It may only be one scene in The October Man, but that scene jumps out at the reader.

If you haven't yet discovered Ben Aaronovitch's Rivers of London series, The October Man might be a little confusing at times. Even so, if you're a fan of urban fantasy, welcome to Tobias Winter's Germany.

As with so many series, I seem to have fallen several books behind. I think they problem was, the library did not have the next book I was up to.

And, this one is a novella set in Germany, Jeff. If the library has this one, you can read it without catching up on the Rivers of London series. It introduces new characters.

Time for me to look for Rivers of London...thanks.