The Lost are the Last to Die by Larry D. Sweazy 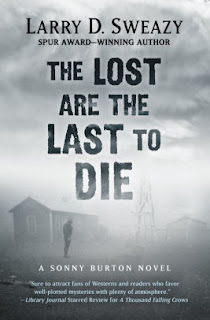 I don't know if Larry D. Sweazy considers his Sonny Burton books to be westerns or crime novels. But, the description of frontier mystery fits these books perfectly. Sweazy returns to Sonny Burton with The Lost are the Last to Die.

Sonny Burton was a Texas Ranger until he lost his arm in a shoot-out with Bonnie and Clyde, an incident described in A Thousand Falling Crows. His career was over, and he really has nothing to do but spend time with his old dog. Then, in 1934, Billy Bunson escapes from Huntsville Prison with the warden's pregnant wife as a hostage. No one knows Billy better than Sonny, so the Rangers ask him to help in the capture. Even then, Sonny suspects there's more to the story of Billy's break-out than the Rangers or the warden are telling him.

Sonny and Billy have a long history together, going back twenty-five years to the time when Billy was just five. He was already a thief, desperate to eat, desperate to stay out of the grasp of his grandmother who ran a house of ill repute. When the 1909 hurricane hit in Texas, Billy's family packed up and left the child, expecting him to catch up. Sonny and Billy spent years running into each other, as Billy ran from the lawman, and Sonny tried to help the boy.

Now, it's too late for both of them. With Sonny's son, Jesse, another Texas Ranger, as back-up, they follow Billy's killing spree. It's a cat-and-mouse game, with both Billy and Sonny knowing one of them will end up dead after all these years.

There's a bleak atmosphere and sense of desperation in the books I've read by Sweazy. Readers who read the earlier book, and even start this one, will know the ending will be tragic. But, part of the bleakness comes from the juxtaposition of relationships. For years, Sonny tried to help Billy, always looking for the boy, while his son, Jesse, was at home. Jesse missed his father, and hated it every time his father left, knowing he was working, but wondering if he would ever return. Now, Jesse himself is a Texas Ranger, watching his father hunt one more time for a boy that always seemed to command Sonny's attention.

Love this series. Am trying to get it via the local library.

KRT
(Who, if he is a robot, really needs some upgrades)

Sorry about the needed upgrades, Kevin!