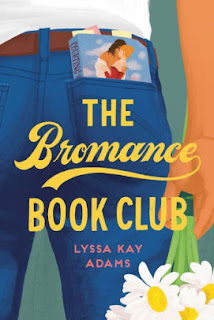 If you're a fan of contemporary romantic comedies or Susan Elizabeth Phillips' books involving sports teams, you might want to try The Bromance Book Club by Lyssa Kay Adams. What happens when a professional baseball player wants to save his marriage and his buddies step in, thinking a book club might help? It's a sexy, fun romance.

Nashville Legends' second baseman Gavin Scott had the best game of his career, and the worst night of his life on the same day. He hit a grand slam to win a playoff game. He thought he hit a grand slam in bed with his wife, Thea, that night, until he realized she'd been faking orgasms for three years. A couple weeks later, friends find him passed out drunk in his rented apartment. Although they don't tell him at first, the men have all been through troubles in their relationships or marriages. And, they now have a book club to provide them with advice. Courting the Countess, a Regency romance, is their book of choice for Gavin.

Gavin regrets his decision to move out. He left Thea at home with their twin daughters and her sister, Liv. As Liv says, she's programmed to take Thea's side in the argument. Liv and Thea grew up with parents who hated each other. Their father is about to marry his fourth wife. The happiest years of their lives were spent living with their Gran Gran. When Thea discovered she was pregnat with the girls, she gave up college and her art career to marry Gavin. In some ways, they were lucky. He was immediately called up to the majors. But, Thea hates being a member of the Legends WAGs club, Wives and Girlfriends. She didn't marry Gavin to give up her identity.

The men who help Gavin add the humorous spark to The Bromance Book Club. They're serious about helping him rescue his marriage, but they pick on him unmercifully. However, this isn't a light romance about an unmarried couple finding love. There are serious subjects here; spouses and parents who have a great deal to lose, including the partner they love. Thea and Gavin both have serious issues in their past. If they are to move on, they're going to have to find the strength to search for the troubles in their past lives.

You might pick up The Bromance Book Club because of the humor. There's a group of men trying to fix a marriage by using romance novels as rule books? The men are baseball players, a hockey player, a football player, a player, men readers don't expect to read romances. But, once readers meet Gavin and Thea, it's easy to become invested in their relationship. This contemporary romance offers humor and hope, sex, and a message of love. Romance readers might want to give it a try.

Thanks for this terrific review. This sounds like such an original story in this era of worn-out themes and tropes.

It was, Elizabeth. This one is fresh and fun.

I loved the review, have put it on hold. On order.
If your goal in life is to increase my holds, you are doing a spectacular job.

Fabulous! Actually, Netteanne, my goal in life is to entice people to read, whether it's the book I review, or something someone else talks about. So, I enjoy Thursdays, and I always welcome book chat! I'm not one of those people who will say, "My work here is done." It's never done as long as there are good books out there.

Found this on audio, so I've got it waiting for my on my iPad. Sounds like great fun. Thanks for the review!

I hope it has a good reader, Sandie, because it is fun.