City of Immortals by Carolyn Campbell 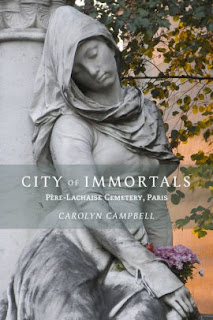 Most people don't say they're ready to go to Paris because of a cemetery. I didn't feel as if I spent enough time at Montparnasse Cemetery when I was in Paris, so Carolyn Campbell's book made me ready to go back. She has a unique view of Pere-Lachaise Cemetery. In City of Immortals - Pere-Lachaise Cemetery, Paris, she and photographer Joe Cornish share the result of over thirty years of research about Paris' most famous cemetery.

According to Campbell, the 107-acre Pere-Lachaise Cemetery is the fourth most visited site in Paris, after the Arc de Triumphe, Notre Dame, and the Eiffel Tower. Napoleon Bonaparte wanted a cemetery for the people, and in 1799 there was a competition to create new cemeteries outside the city center. The garden-style cemetery was the first of its kind in the world, although it became a model for others. The cemetery was named after the Pere Lachaise, confessor to the Sun King. It was laid out by architect, urban planner, and landscape designer Alexandre-Theodore Brongniart. However, there were few plots bought. The church was opposed to it because they would lose money,  and people weren't interested in plots away from the city. But, once remains of Moliere and Jean de La Fontaine, and the lovers Heloise and Abelard, were moved there, people started to buy plots. Now, it's a final resting place with modern plots and grand mausoleums, with 300 spaces coming available every year. Currently there are remains of 2 million people there.

Campbell has a background in the arts, so she's particularly interested in the creative people who are in Pere-Lachaise. She discusses the artists, musicians, and composers who are there, although she also mentions several of the other monuments. But, her focus is on the creative people. In one unusual section, she "has conversations" with some of the immortals there - Colette, Chopin, Jim Morrison, Oscar Wilde, Edith Piaf.

The photographs in this book are beautiful. But, Campbell's greatest contribution is the invaluable map of the cemetery with a list of locations of creative people buried in the cemetery. She breaks the cemetery into three parts, and describes some of the walking difficulty in getting to some of the sites. She goes into detail as to each site, provides background of the artist, and, when known, also provides information about the artist or architect who worked on the memorial.

There are 107 acres in Pere-Lachaise Cemetery, so, of course, Campbell doesn't identify every site. It took her over thirty years to identify, write about, and photograph the 84 cultural icons covered in this book. She discusses the architecture, the art and symbolism of cemetery art. City of Immortals is a book rich in detail and history. It's just right for someone who loves cemeteries and the history and stories behind them.

Love this! Adding to my "gotta have" list.
I loved our visit to Montparnasse Cemetery, and agree it was too short.
And, when you go back, I recommend a visit to Montmartre Cemetery.
Cemeteries are fascinating, but especially in Paris, I think.
xxoo

It is, Jeff. And, she says Edith Piaf's is as well.

I loved that visit, too, Kaye. I'm just happy when had the time we did there, and the company who was together. Maybe too short, but it was special. When I go back, I'll have to spend time going to cemeteries, as you did with carousels. It was a fascinating book, and, if I didn't want to keep it, and the map, I'd be sending it to you. Hugs, my sister of the heart!