The Bodies in the Library by Marty Wingate 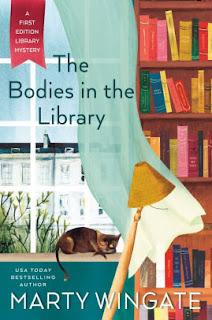 Marty Wingate kicks off a new cozy series, The First Edition Library Mysteries, with The Bodies in the Library. To be honest, I preferred the police over the amateur sleuth, though. For a change in a debut cozy, the investigating police officers are kind and intelligent while the sleuth herself bumbles her way through the book.

Hayley Burke is not really qualified to be curator of Lady Georgiana Fowling's First Edition Library in Bath, England. She knows nothing about the Golden Age of Mystery, and hasn't read Agatha Christie, Dorothy L. Sayers or Ngaio Marsh. The small group that writes fan fiction and meets in the library is much more familiar with Lady Fowling's favorite authors than Hayley is. But, when one of those writers ends up dead, and the police don't seem to have any leads, Hayley decides to step in. She's going to read an Agatha Christie mystery and solve the case as if she was Miss Jane Marple. What would Miss Marple do?

That's the question Hayley asks herself as she questions the police, follows suspects, and feels threatened by a few of the men involved in the case. Along the way, she meets a college lecturer who distracts her from the inattention paid her by her so-called boyfriend. He's one bright spot in Hayley's life. She's a pushover for her daughter and her boyfriend, and allows them to walk all over her.

Hayley, who is in her mid-forties, just wasn't my cup of tea. Her lack of confidence and lack of knowledge wore me down, as did the length of the book. I think it could have been shortened. My recommendation is to actually read the authors of the Golden Age mysteries if that's what you're looking for. However, there may be readers who enjoy Hayley's attempt to play detective in The Bodies in the Library.

I think a lot of books these days are too long. 180 pages is probably the max 90% of books need.

You're right, Glen. In the "good ol' days", back when I was in high school, so many crime and suspense novels were 192 pages. 192 pages is still the perfect length. I agree with you.