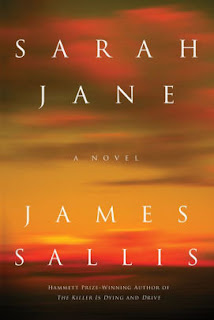 I had never read one of James Sallis' books when I received Sarah Jane. Lyrical, powerful, haunting,
ambiguous ending. There are so many terms to describe this disturbing book. I seldom say a book is a must-read, and I'm the last person to read for language. But, Sallis' spare, concise writing is worth reading. This crime fiction book should be picked up by anyone who appreciates a turn of phrase, the graceful use of language.

Sarah Jane narrates her life story. When she says, right up front, I didn't do all of the things they claim I did, the reader is sucked into the story of a flawed character. She tells of growing up in the south on the Tennessee, Alabama border, where her father takes responsibility, and says to her, "We're from good hillbilly stock, Pretty. We don't call the police." That's ironic, considering Sarah Jane's future with cops, and as a cop, but it's still the truth of her life.

Her mother abandons the family, coming and going from their home, but gone more often than not. Sarah Jane herself leaves home at sixteen to bum around, live with hippies, get arrested. She's told it's jail or the service, so she ends up in the army in the Mideast. She loses a close friend, and ends up back in the U.S., where she cooks at various diners and restaurants to survive. Eventually, she marries an abusive cop, leaves him, lives with another cop. And, then Sarah Jane herself becomes a cop in a small town called Farr.

And, one day, Sarah Jane becomes acting sheriff when her mentor disappears. As she looks for clues to his disappearance, she finds clues to a troubled man who came home from the service with PTSD. But, her search is interrupted when Sarah Jane's own past comes calling in the forms of an FBI agent and a cop.

Sarah Jane is complicated, but, oh, Sallis' sentences! It's hard to resist philosophical phrases such as "simpler times when, mistakenly or not, we understood the American dream to be collaborative rather than competitive."  Or, "All stories are ghost stories, about things lost, people, memories, home, passion, youth, about things struggling to be seen, to be accepted, by the living."

He says, "The unexamined life may not be worth living, but the examined life, any examined life at all, is for damn sure going to surprise, confound and disturb you." That's Sarah Jane.

*****
FTC Full Disclosure - I received this to review for a journal.

Yes, brilliant writing. I'm a third of the way through it now. His books may only be around 200 pages but they are so dense you need to read them carefully. That "collaborative" line jumped out at me too.

I usually read for plot, Jeff, but, with that book, it's character, and the writing. Oh, that writing!