Penny for Your Secrets by Anna Lee Huber 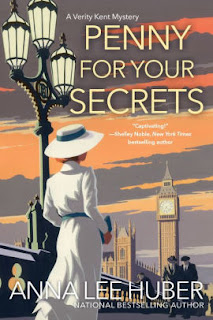 I wish I had read Anna Lee Huber's first two Verity Kent mysteries, but it can't be helped. Penny for Your Secrets, the third in the series, caught my attention. I'll be watching for future books featuring Verity Kent and her husband, Sydney.

By September 1919, England is returning to normal after the Great War, or, at least as close to normal as a country can get after losing half the men. Verity, who had worked undercover for Special Services, is no longer working for them, and her husband, Sydney, is back home. The young couple had only been married for three days when Sydney went off to war. Now, they have to get used to married life again, to Verity's boredom after an adventurous job, and to Sydney's occasional moods and depression.

Like others in their well-to-do social class, they spend their evenings and nights at parties, or at clubs where they dance and drink too much. It's all a frantic attempt to forget what they've seen in the war, and the people who have been lost. In fact, they are at a dinner party at Lord Rockham's house when his wife, Ada, pulls a gun from her seat at the table, and waves it around, threatening to kill Rockham. When the telephone rings the next day, it's a hysterical Ada. Rockham has been killed, probably by that same gun.

Ada begs Verity to investigate, and she and Sydney agree to question servants and talk to others, including Rockham's first wife. It isn't long before the investigation stalls, and Ada still looks like the most likely suspect. While she never forgets that investigation, Verity and Sydney agree to look into the supposed suicide of a friend's sister. As unlikely as it seems, the two cases seem to have a connection. Somewhere in the murky world of British politics lies a dirty secret.

If you're fascinated by post-war Britain, you might want to pick up this series, or, at least Penny for Your Secrets. It's not a Charles Todd book or a Jacqueline Winspear. It's an atmospheric story that focuses on the lives of the upper class after the war years. Perhaps think of it more as "Downton Abbey". It's an intriguing story with strong hints of continuation. But, it's also the story of a society and a country that is changing. Well-developed, likable characters round out this appealing mystery.