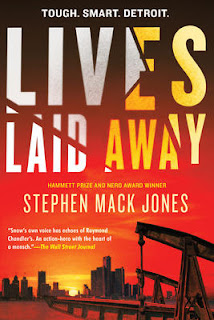 After winning a twelve million dollar settlement against the city of Detroit for wrongful termination, ex-cop August Snow settled in his childhood neighborhood of Mexicantown, buying up property and renovating it, as he tries to bring back the area. But, the friendly neighborhood is uneasy. ICE, the US Immigration and Customs Enforcement police, are trolling the streets, mapping potential spots and safe houses for undocumented immigrants. And, Snow, whose father was an African-American cop and mother was a Mexican-American artist, hears the stories from frightened people even in the grocery store.

When the newspapers report that "Marie Antoinette took a header off the Ambassador Bridge", police want to quickly dismiss the case as just another suicide. But, Bobby Falconi in the coroner's office sees it differently, and lets Snow know the girl was raped, brutalized and drugged. Snow's godmother, Elena, an activist for human rights, identifies her as Isadora Rosalie del Torres, a nineteen-year-old undocumented worker from Mexico City. ICE raided the restaurant where she worked, and Izzy disappeared into the system. Snow is shocked when his beloved godmother, armed, takes him to a clandestine meeting where he's told that Izzy wasn't the first or last young woman to disappear. There seems to be sex trafficking going on in Detroit.

August Snow, ex-cop, former Marine in Afghanistan, is just the person to trek through the muck of strip joints, bars, and back rooms to discover who is behind the new sex trade in undocumented women. Together with his godfather, Tomas, and a few friends with specialties, Snow is determined to root out the current evil in his world.

I never read Jones' debut novel, August Snow, although it went on to win the Hammett and Nero Awards. But, I'll follow the series now, and I'll introduce my brother-in-law to it. Snow is a character whose heart is big enough to accommodate all of his neighbors, while his anger can wipe out an entire room. The latest book has wonderful characters, and, at times, moments of that cop humor, although the story deals with a serious subject. There's religion and poetry and love, right alongside guns and crime and violence. And, I have to admit one short scene, a story from Afghanistan, made me tear up.

I wish I had the time to catch every outstanding novel as they come out. I'm just glad I caught up with August Snow by the second book in the series, Lives Laid Away.

Great book. Great series. Go back and read the first one. It will be well worth it.

Sounds dark, but good. I will look for the first one.