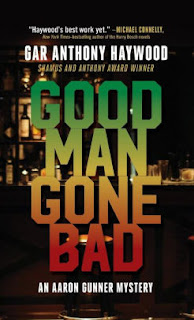 It's been a long time since I read one of Gar Anthony Haywood's books. In the mid-90s, I read the two books he wrote about Joe and Dottie Loudermilk, a retired African-American couple who traveled the U.S. in their camper. I had never read any of the Aaron Gunner books. And, it has been nineteen years between the books in this series. Gunner is back in Good Man Gone Bad.

Aaron Gunner may appear to be a streetwise, sixty-year-old private investigator, but he's always depended on his cousin, Del. Del has been his confidante and best friend. But, Del's final phone call almost destroys Gunner. Del blames himself for the shooting of his wife and daughter, and then shoots himself. That's what the evidence shows, according to the police. Gunner can't accept that his cousin would shoot the women he loved.

While Del's daughter lingers in the hospital, Gunner searches for answers as to why the good man he always admired would shoot anyone. But, there were secrets in Del's life. His business was in financial trouble. Gunner begins to wonder if he knew his cousin any better than he knows the suspect in another shooting, a fellow Vietnam vet who might have snapped. As Aaron's investigations lead him through the sometimes violent streets of South Los Angeles, he realizes even a good man can be pushed too far.

Gar Anthony Haywood won the Shamus Award for Fear of the Dark, the mystery that introduced Aaron Gunner. In this latest book, the PI has even more reasons to be a brooding, troubled man. Haywood reminds readers of man's complex motives, and that there's always the possibility of violence, even when the perpetrator seems unlikely. After a nineteen year absence, Haywood brings back a dogged investigator determined to find the truth, no matter how much it hurts.

I read the first two or three Gunner books when they came out (starting in 1988), but I must admit I got a bigger kick out of the Joe and Dottie Loudermilk books, about a couple that travels the country in their Airstream RV, at least partly to get away from their awful children. They were a lot of fun.

I agree, Jeff. I enjoyed the Loudermilk books, especially since my family camped.