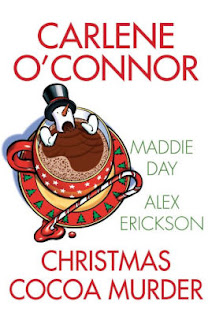 Carlene O'Connor, Maddie Day and Alex Erickson have more in common than the facts that they write cozy mysteries featuring amateur sleuths. Each of their novellas in Christmas Cocoa Murder features cocoa. Well, duh. Of course. They are also all enjoyable stories, which is unusual in a collection. Often, one story is weaker than the others. All three of these will please cozy mystery fans looking for new Christmas stories.

In "Christmas Cocoa Murder", Carlene O'Connor sweeps us off to Kilbane, County Cork, Ireland, where Siobhan O'Sullivan has just graduated, and will be Garda O'Sullivan in the new year. Her Christmas break is a time to relax and celebrate with her five siblings. But, it seems someone has been stealing dogs, including the O'Sullivans' Trigger. When the local Santa is found dead in a tank of cocoa at the town's Christmas extravaganza, the dogs are also found. Santa may have been a thief, but who would want to kill him?

"Christmas Cocoa and a Corpse" by Maddie Day takes readers to Brown County, Indiana where Robbie Jordan runs a country store that serves breakfast and lunch. This year, she's selling her popular cocoa mix. But the police confiscate all the packets after a dislikable local businessman is found dead. And, the father of Robbie's boyfriend gave the man a box of those mixes for a present. Despite the hectic Christmas rush at the country store, Robbie is determined to prove her possible future father-in-law isn't a killer.

Was it "Death by Hot Cocoa" for the man who set up a Christmas escape room in Alex Erickson's novella? Bookstore cafe owner Krissy Hancock accompanies a friend, and enjoys the puzzle of her first escape room. However, it isn't as much fun when the participants find their host dead, and realize they're trapped in the escape room with a body and a killer.

Each of the stories has a likable amateur sleuth. The first two are set in small communities, where family and friends play major roles. The third story could be set anyplace, but the answers are dependent on a small group of participants. Christmas Cocoa Murder is an enjoyable collection. I'd suggest you settle down with the book and a nice cup of cocoa, but this might not be the right suggestion. (wink)