A Legacy of Murder by Connie Berry 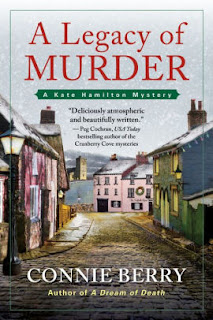 Kate Hamilton is caught up in antiques, murder, and a troubled personal life in the second intriguing mystery by Connie Berry, A Legacy of Murder. This time, the American antiques dealer is in Suffolk County, England, rather than Scotland, but she's still in a charming, atmospheric village just before Christmas.

It's just been a month since Kate met Detective Inspector Thomas Mallory while they were both on vacation in Scotland. They were tangled up in a murder investigation, but now is Kate's chance to get to know him better, while also taking the opportunity to spend time with her college-age daughter, Christine. Christine is an intern at Finchley Hall in Long Barston in Suffolk, and she snagged a room for her mother on the property. The interns are preparing for an exhibit of the Finchley Hoard, a collection of treasures buried and hidden in 1546 during a Peasants' Revolt, and only unearthed in 1818.

Kate's on a tour of the estate when a young boy finds the body of one of the interns. Tabitha was in charge of preparing the exhibit, and now that she's been murdered, Lady Barbara Finchley-fforde is afraid the show will have to be cancelled. She needs the money for upkeep of the property, so she proposes that Kate take over the preparation. Kate knows Tom will be busy with the murder investigation. Christine is preoccupied with her job and a boyfriend. So, she agrees, but it isn't long before she finds Tabitha's notes about a discrepancy in the collection. However, between her research, Christine's tantrums over her boyfriend, and more troubles on the estate, Kate doesn't have time to investigate the discrepancies. When another murder occurs, and there are thefts of small pieces from other homes, Kate worries about the connection to Finchley Hall and the valuable collection. And, Tabitha's murder, along with the rumors, are eerily similar to the murder of another intern twenty-three years earlier.

Connie Berry has a fascinating set-up for a character-driven, atmospheric series, and she leaves a clue as to where the third book will be going. Kate Hamilton is a well-developed character, so well-developed that it's easy to get exasperated with her and her problems with her immature daughter who tends to be stubborn and behave inappropriately. But, Kate's part of the sandwich generation, caught between an aging mother who she adores, and her demanding daughter who becomes a murder suspect. She's a widow who has her own issues, but she shows maturity and growth in her decisions.

There are some delightful new characters introduced in this second book, a knowledgeable antiques dealer, as well as Lady Barbara and her friend Vivian. There's also humor involving the rivalry between an old pub and one opened by newcomers to the village. Readers might start the series because of the settings in Scotland and England, or the connection and information about antiques. The mysteries combine cold cases with local legends and stories, which make them appealing. But, readers will continue to come back because of Kate Hamilton. And, it doesn't hurt that Tom Mallory cares deeply for Kate, and respects her knowledge and ability. That's refreshing. Connie Berry's series is refreshing with a realistic, mature amateur sleuth.

If you're a fan of Jane K. Cleland's mysteries, check out A Dream of Death and A Legacy of Murder.

What is the deal with these incredibly annoying teenage daughters? We've been noticing it on television lately - Homeland for one, The Americans for another, and currently the Icelandic Trapped. They are always girls, and as in Trapped, sometimes you reach a point where you just have to fast forward past their pointless scenes.

I have had it with teenage angst and sullen glares!

You are so right, Jeff. I just wanted to slap her. And, she's in college, so she should be past that sullen stage. Her mother blamed the early death of her father. I didn't buy it, because he didn't die until she was almost out of high school or in college - I don't remember which. Nope.

That was my biggest problem with this book as well. For a college age girl who is studying and interning abroad, she was annoying and immature. And I have a college age daughter! Except for the daughter, I really like this series.