A House of Ghosts by W. C. Ryan 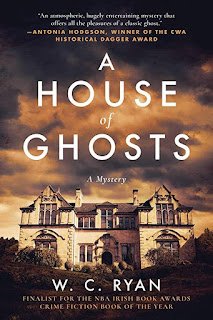 If I was putting together my top ten books of 2019 right now, W. C. Ryan's A House of Ghosts would be in the top five. The engrossing ghost story/historical mystery is definitely one of the best books I've read this year. Fans of Charles Todd's Ian Rutledge mysteries might want to pick up this book. It has everything - spies, ghosts, wartime issues, a touch of romance, an isolated house mystery a la Agatha Christie. It's wonderful. It was released in the U.K. last year, where it went on to be a finalist for the NBA Irish Book Awards Crime Fiction Book of the Year. I'm not the only one impressed by this story.

It's 1917, and Great Britain has already lost a number of young men in World War I. Armaments manufacturer Lord Highmount lost both of his sons. His house, Blackwater Abbey, on an island off the coast of Devon, has a reputation of being haunted, and he hopes to take advantage of that. He invites a number of people, including two mediums, to the island, with hopes he can contact his sons. Kate Cartwright, whose brother was lost at the Somme, and the mysterious Captain Robert Donovan, attend the gathering on behalf of the Secret Intelligence Service. Kate has her own inherited ability to see ghosts, and Donovan has his orders. The SIS suspects a spy will be there, someone who has passed secret weapons designs to the Germans.

It's an uncomfortable gathering, with two sets of parents desperate to contact their sons, Kate and Donovan on the look out for suspicious actions, the mediums with their own agendas, and several younger people, including Kate's former, and now pretend, fiancé. It doesn't grow any more comfortable after the seance the first night when a former solider who was trapped underground for eighteen days communicates with the dead, or when one set of parents hear their son. But, it isn't a ghost who cuts the telephone line, opens secret passages, and leaves a man dead.

A House of Ghosts is a riveting story. While it's a ghost story and a mystery, it also tells of a lost generation and the cruelty of war, tunnels and capture, gas, ships sunk by U-boats. It's a story of spies and wars, disguised as a ghost story. As I said, it's one of my favorite books of the year.

I'm reading Pablo Neeruda's The Captain's Verses, a collection of poems. I love poetry, and I'm learning Spanish, so it's a nice way to learn: the poems are in Spanish on the left page; the translation in English is on the right page.

I also love mysteries, and I'm reading the They Tell Me You Are . . . series by David Hagerty, set in Chicago. This author really knows Chicago! And the series is interesting, following the political decline of a politician when he becomes involve in a cover-up for personal reasons. (Don't want to give any spoilers here.

I've got an advance copy of this one, Lesa, and I'm very much looking forward to it. Seems like the perfect time of year and I also like all the war and spy info you talked about.