A Cruel Deception by Charles Todd 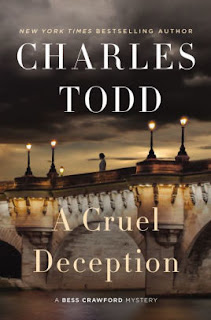 While the shadows of politics in Charles Todd's latest Bess Crawford mystery are interesting, the book itself was not. A Cruel Deception is a slow-moving, drawn out story that might appeal to the authors' fans, but most of the rest of us will find it tedious.

Most of the army hospitals in England are closing down, so it doesn't come as a surprise to Sister Bess Crawford when she's sent to nursing headquarters. She expects a reassignment. Instead, Matron asks her to take a personal job. Matron's son, Lawrence, had been working with the British assigned to the peace treaty in Paris. However, Lawrence hasn't shown up at recent meetings. Matron is worried that the soldier, who had been wounded and had a concussion, may now have a drug dependency as many other soldiers did. She asks Bess to go to Paris to track down her son and check on his condition.

While Bess' father, a retired colonel from Lawrence's regiment, is involved in the peace process and doesn't have time to help her, one of his assistants offers help, but Bess is too secretive to accept it. Instead, she searches for Lawrence on her own, and tracks him to St. Ives, where, as his mother suspected, he's become addicted to laudanum in order to escape his nightmares and fears. As Bess soon discovers, some of his fears are real. Lawrence, and later Bess, are targeted by an unknown enemy who seems to know Lawrence's wartime experiences better than he himself does.

I do understand that all mysteries are implausible, but this one bothered me because it's a historical mystery. It seems so unlikely that a British nurse could track down a missing soldier in post-war Paris, amidst all the turmoil and relocation. By the time the mystery itself was solved, I just didn't care.

A Cruel Deception was plodding and slow-moving. The only saving grace was the presence of an American pilot from New Mexico. He was charming, and did his best to keep an eye on Bess, despite her independence. He also provided one amusing twist at the end of the book. Captain Clifford Jackson could have starred in his own series.