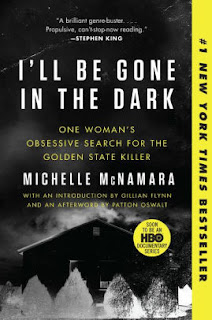 See, I didn't throw you any curve balls this week. We're going to talk about what we're reading.

I'm reading a true crime book that was a bestseller last year, I'll Be Gone in the Dark by Michelle McNamara. She's the writer who named the Golden State Killer, but died in her sleep before he was identified, and before she could finish her book. I don't read as much true crime as I used to. I'm writing a blog for work about true crime books, so I needed to pick up this one.

What are you reading this week? Let's talk books!
Posted by Lesa at 3:00 AM

Labels: What Are You Reading?

I finished HAUNTED HOUSE MURDER by Leslie Meier, Lee Hollis, and Barbara Ross. The book contains three mysteries set around Halloween. None of the stories were very memorable.

An ARC of THE BREAKFAST BURGER MURDER by Rosie A Point. A small town cozy mystery.

I just started THE VINE WITCH by Luanne G Smith about a young witch who has been trapped by a curse. When she finally escapes her world has changed. So far I’m enjoying it.

Michelle McNamara was the wife of Patton Oswalt. She was only 46.

Current reading: the second of Emma Viskic's Melbourne area-set books about deaf PI Caleb Zelic, AND FIRE CAME DOWN. Besides his problems hearing (he has hearing aids but relies mostly on lip reading and people who can sign), he seems to get beat up a lot.

Don't know how much reading I will get done as we are off this morning to D.C. until Monday.

Sandy, Sounds like a cozy, paranormal week for you.

Jeff, When I first heard she died a year ago, I had to research to find out who Patton Oswalt was. Just not too into comedy in TV or movies.

I didn't read The Chain. I gave away my two copies instead. What did you think, Jeff?

And, I'm leaving for Connecticut on Saturday, so I don't know how much reading I'm going to get done, either. Safe travels!

I wanted to like THE UNLIKELY ESCAPE OF URIAH HEEP by HG Parry more, as it has a great premise. Charley, a former child prodigy and Dickens scholar/professor, can "summon" literary characters right out of their books. He isn't very good at controlling this skill, and his attorney brother Rob often receives late-night calls from Charley, asking for help with his latest disaster. After the appearance of Uriah Heep from David Copperfield (with a second version of this character appearing shortly thereafter), a series of events leads to the pair's discovering a hidden Victorian street in downtown Wellington, New Zealand, which houses a plethora of literary characters--including five Mr. Darcys, Heathcliff, and even Maui--and the threat of another summoner, this one aiming to take over the world. Other characters include a spunky girl detective Charley has read out as a child, the brothers' mother (who has her own skill), and Rob's fiancee, who has never been told about Charley's talent. There are some fun twists and interesting ideas here, but the book is (IMHO) at least 100 pages too long, the action bogs down frequently with too much description and conversation, and there is not enough character development for me. I almost gave up several times. Reader reviews are good, however, so others may have more patience than I did.

Of the three Stewart Hoag mysteries David Handler has released since ending a 20-year break in the series (while he worked on the Berger and Mitry series and other books), I think THE MAN IN THE WHITE LINEN SUIT is the best. I love the main character of Hoagy (Stewart), who is finally at work on his second novel after 10 years of ghost writing others' memoirs. He and his ex-wife, actress Merilee, also seem to be reconciling, and she offers him her downtown penthouse while she is off filming in Budapest. Hoagy is hired by a much-hated editor to find her bestseller-author father's latest manuscript, which appears to have been stolen by its real author, a journalist who is a friend of Hoagy's. He wants a co-writer credit and one-third of the profits, as promised but not delivered. There are a few murders and a lot of suspects, not to mention a classic "get all the persons of interest in one room and reveal the killer(s)" scene. But the real pleasure is with a group of fun characters, including a brilliant but quirky police detective, the old author's bimbo wife and, of course, Hoagy's ever-faithful basset hound and sidekick, Lulu. I loved it.

In THE DEARLY BELOVED by Cara wall, Charles and James received their "calls" to be ministers in different ways, and they have very different styles and beliefs. So when they meet and find themselves hired as co-ministers at a NYC Presbyterian church still reeling from their last minister's influence, they have to find ways to split up the job and assume responsibilities based on each one's strengths. Their wives couldn't be more different as well--James' wife, Nan, is more traditionally religious than he is, while Lily, Charles' wife, who lost both parents in an accident when she was a young child,is not any kind of believer--she won't even go to church. And Lily won't give Nan the time of day. Over the years, both couples have to deal with very difficult personal and family issues while satisfying the needs of their parishioners. Make no mistake--this is not a lightly told story like those in some other popular series featuring small-town ministers dealing, sometimes hilariously, with their flock. This is a dead-serious story, very well written, and with an uplifting ending. I don't think there will be a sequel, but Wall is a promising debut author, and it was announced yesterday that this book was chosen by Jenna Hager for the Today Book Club.

Last night, I finished JUDGE THEE NOT by Edith Maxwell. I'm having a hard time judging what I thought of the book.

Oh, several of the books mentioned sound quite interesting to me. Had to stop and see if they were owned by the library and what the hold list might look like. Good on some, long list on others.

I'm listening to Riley Sager's new book LOCK EVERY DOOR. Enjoying it so far. I'm participating in the R.I.P. XIV Challenge and spooky is my middle name right now. Enjoyed discussing THE ESCAPE ARTIST by Brad Meltzer at our mystery group last night. Some liked it. Some did not (my husband among those).

We also talked about some of the 'news' in the publishing world regarding libraries and e-books. Some of our members have wondered why the hold lists are so long on the e-format and why the library doesn't immediately pick up lots and lots of copies. I shared some thoughts on that and told them how very expensive many e-books were for libraries to purchase. Print and e-book format is quite different from a library perspective. Anyway, it was an interesting discussion.

We're doing SHIRLEY JACKSON Month for October and I'm looking forward to reading or listening to several of her works. And maybe squeezing in a biography of Jackson, A RATHER HAUNTED LIFE.

Another slow week for reading. I finished EVVIE DRAKE STARTS OVER by Linda Hughes. I liked it but I did not love it despite it being on many summer "must read" lists.

Last night I finished DEATH COMES TO DARTMOOR by Vivian Conroy. It is the second in the Merriweather and Royston mysteries. They remind me of a gentler Veronica Speedwell. I liked this one as well despite figuring out who the murderer was.

Today I am starting PENNE DREADFUL by Catherine Bruns.

Lesa, I read you are traveling to Connecticut. That will be a nice break away. Have a fun time.
I didn’t finish anything that I am reading. In no hurry.
Looking forward to some cooler weather. It is still to warm here.
Hugs ~~

Margie, I was very interested in your reviews. I haven't received the Uriah Heep yet. And, the Stewart Hoag books have just left me feeling so-so. I'm not sure I'll even read the latest one.

Kay, Libraries don't do a good enough job telling our patrons what's going on. I know when I talked to a small group, they were all astonished at the cost of ebooks and eaudios for libraries. I'm glad you could tell some of them what is happening.

Spooky is definitely not my middle name!

Mark, I meant to say something about Judge Thee Not. You just made me more eager to pick up my copy to see what you mean by not knowing what you think.

Sharon, Since you're the second one to say Evvie Drake was just okay, I think I'm going to skip it for now.

Yes, Charlotte. The cat sitter will be taking over while I meet up with family for the trip. And, I was thinking of you. Hope you're doing okay with the hurricane. Hugs!

I don't think you will have the same issues with JUDGE THEE NOT that I did. :)

I just started reading an upcoming nonfiction release by Teresa Funke called Bursts of Brilliance for a Creative Life.

Oh, that one sounds interesting, Patricia. You'll have to keep us posted.

I read Killing the Rising Son by Bill O'Reilly, an occasionally inaccurate telling of the end of WWII.

All Cry Chaos by Leonard Rosen; a dull sort of espionage novel.

AntArkos Rising by Jeremy Robinson; Inspirational novel about a polar shift, where Antarctica. Of course, the Nephilim come back with it.

Glen! If you happen to stop back, you won one of the books from the last contest. It's on its way too young. I just didn't make time to write the email, but there's a note in the book. Enjoy, and congratulations!

Awesome! I'll let you know when it gets here!

I read the book you’re reading. I was not impressed.

I feel like I was fooled because this book is not at all what I expected. Dates were all over the place, and the true crimes were not given in any type of order.

Could it be that its great reviews are mostly because McNamara died before she could finish her book?