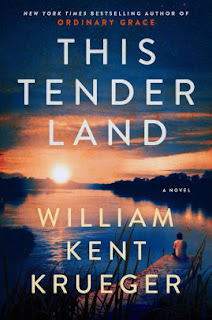 William Kent Krueger's second coming-of-age story is not the sequel to Ordinary Grace that readers expected. Instead, This Tender Land is his version of Huckleberry Finn or the Odyssey, as adolescents are forced to move toward adulthood. It's a lush, lyrical account.


As a great-grandfather and storyteller, Odie O'Banion remembers 1932, the year he was twelve and embarked on one of the great adventures of his life. That year, during the Depression, Odie and his older brother, Albert were the only two white children at the Lincoln Indian Training School. The O'Banions were orphans, while the other children had been taken from their parents to have their native cultures and languages beaten out of them. Mrs. Brickman, "the Black Witch" oversaw the abusive school.

After the tragic death of a protector, Odie and Albert fled, accompanied by a Native American friend and a young girl, two other "Vagabonds". The quartet take to the river to escape. They hide and run to escape arrest, and find unexpected kindness and assistance at times.

This Tender Land is a remarkable story of the physical and spiritual search for hope and life, for a future. At the same time, it deals with the wanderings of people during the Depression. Krueger also reveals the abusive treatment of Native Americans in schools. There's an appreciation of the river and the land, and the solace only music can provide.

Readers who want an actual mystery might be disappointed. However, those who want to read about the mystery of life will discover what one of Odie's companions observes. "You tell stories but they're real. There are monsters and they eat the heart of children."

I have this one coming to me soon. When I met this author at Left Coast in Phoenix a few years ago, he told me that he was writing another standalone book. I had been explaining to him how very much our mystery group enjoyed Ordinary Grace, though it wasn't a 'typical' mystery. I'm suspecting that this is the book he was alluding to in our conversation. I am delighted to try it and suspect it will be a favorite.

I suspect it was the one he was talking about as well, Kay.

ORDINARY GRACE will always stand as one of my all-time favorite books, and I'm actually glad Krueger abandoned the sequel (he wrote about it on his blog a while back). Oftentimes sequels can be a bit of a let-down. I'm eager to read THIS TENDER LAND.

Hugs to you and the kitties, Lesa!

Oh, Beth! Hugs, back. You're right. ORDINARY GRACE was special, and I don't know how he would have managed a sequel. Better not to have written that. (Jinx is having issues right at this moment. I don't know why he keeps talking to me.)

ORDINARY GRACE was one of my book group's favorites. And mine as well.

Patti, It remains one of my favorite books as well.