The Off-Islander by Peter Colt 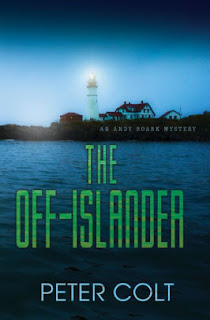 Although debut author Peter Colt is younger than his character, Andy Roark, his experiences and his acquaintances must have helped create the Vietnam vet turned private investigator. Colt himself is a police officer in a small New England city. He spent over twenty years in the Army reserve, and was deployed to Kosovo and Iraq. Andy Roark is a veteran turned cop, and then private investigator in The Off-Islander.

It's Boston, 1982. Andy Roark's best friend, attorney Danny Sullivan, asks him to look for a man who has been missing for years. Andy and Danny grew up together in Boston, in Southie, but took separate paths. While Danny went to Harvard and law school, Andy joined the army and went to Vietnam. Both men are still trying to recover from their past. Andy lost the woman he loves to his nightmares, while Danny, a successful attorney for the Boston mob, is desperate to move up. This case could help both of them.

The client is Deborah Swift, a wealthy woman whose husband, Geoffrey Swift of Swift Aeronautical, is planning a political campaign. But, Deborah's father, a former marine in Korea, walked out on the family when she was little. She wants someone to track down her father because she doesn't want any surprises when her husband runs for political office.

Although the Pinkertons have already investigated, Andy Roark follows a clue to Cape Cod, and then Nantucket. Although his investigations seem to lead to dead ends, when someone pushes him off a cliff, and then later he's shot at, he's guessing he might have stirred up trouble.

The Off-Islander is a solid, atmospheric debut, descriptive of Boston's traffic, and the islands off-season. It's also rich in detail as to Andy's nightmares and time in Vietnam, a war still not spoken of in 1982. Colt attempts to recreate Andy Roark in the image of the hard-bitten PIs of literature, but Roark had to read detective novels to find out how to do his job. Despite his books and his war experience, he's not quite walking the mean streets of Cape Cod.

Fewer road signs, and a little more investigation. Peter Colt's new series is a promising one.

Sounds interesting. I'll probably be searching for anachronisms the entire time I read it.

You probably will, Glen.

Since he is a MA author I found him at the library and put him on my list.

I hope you enjoy it, Gram!