Nothing Ventured by Jeffrey Archer 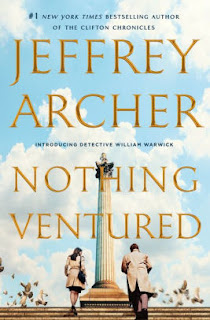 I'm a little nervous that Jeffrey Archer is starting a new series. I really enjoyed Nothing Ventured, but
Archer says in a note to the reader that he's working on the second, and the progress of the series will depend on his longevity. Archer is 79.

The new series is set in the 1980s. Archer says it's a story of a detective, not a detective story.

William Warwick's father, a criminal barrister, always hoped his son would join him in his practice. But, from the age of eight, William knew he wanted to be a police detective. Warwick's mother sided with him, and he went to university, studied art, and became a police officer.

Warwick could have been fast-tracked as a college graduate, but he chose to start at the bottom, walking a beat as a police constable. For the first year, his lessons are on the street, under the guidance of an experienced, street-wise constable, Fred Yates. But, when it was time to move on, and he passed his detective exam, he was assigned to the Metropolitan Police Force, attached to Art and Antiques.

While he works several cases, his major assignment involves the theft of invaluable paintings, forgeries, and a finder's fee when the paintings are "recovered" on behalf of the insurance companies. In the course of his investigation, William meets a beautiful gallery research assistant, Beth Rainsford, who has family secrets. Warwick's case, and Beth's secret, result in riveting simultaneous court trials, in a story that builds in intensity.

While the storyline and the investigations are straightforward, the resulting trials are fascinating. Archer ups the suspense by putting them opposite each other in the courthouse so the reader is eagerly waiting to see the judgments.

Jeffrey Archer's latest novel (and hopefully a series) features a likable police officer who works hard. The supporting cast, Warwick's family, other officers, Beth Rainsford, are interesting characters, as so many of Archer's have been over the years. Let's hope there's time for more books in the William Warwick series.

My boyfriend is a fan of his books. I know he has this one on order from the library