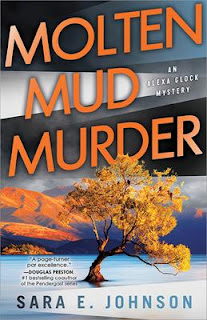 It's always fun to discover a debut author who writes an atmospheric mystery with an interesting sleuth. Sara E. Johnson takes readers to New Zealand in Molten Mud Murder. I hope readers appreciate the descriptions of the country, and the details of the culture of the Maoris. The debut mystery is rich in such details.

Rotorua, New Zealand is famous for the geothermal lands, similar to Yellowstone National Park in the U.S. The thermal activity has created mud pots, and there's an unidentified man dead in the mud pots. American Alexa Glock is a forensics expert who finished a job in Auckland, and hopes to find a temporary job to extend her work permit. When she learns about the unidentified man, she offers to help the local police. Glock is trained in odontology, the scientific study of teeth. That might help identify the victim whose head was boiled in the mud.

As the police investigate, they discover the victim violated the sacred lands of the Maori, a large population in the community. He and another man went onto a sacred island without permission. He disregarded the Maori code, and offended their gods. There are many who think he deserved to die.

Alexa has heard the murmurs, and she's reluctant to visit the sacred island. However, she's sent there to investigate. Even though she's accompanied by other officers, and one who is a Maori, she feels threatened. She's warned.

When Alexa's lab assistant is attacked, and a Maori is murdered, the search for a killer intensifies. Is the killer a Maori, or someone who wants to shift the blame to them?

Alexa Glock is an interesting character. She worked for the North Carolina State Bureau of Investigation, and has fallen in love with New Zealand. But, Alexa has personal issues, ones that hamper her comfort and intimacy with others. She's clumsy at times, but also efficient, eager, and knowledgeable. And lonely.

While Alexa is the amateur sleuth, it's New Zealand itself that is the star of this intriguing debut mystery. There's a strong sense of place, history and Maori culture in the compelling story. In fact, I found myself watching YouTube videos about the Maori haka dances. The book combines forensic investigation with the rich details of a fascinating culture. I'm looking forward to Sara E. Johnson's second mystery after her strong debut.

I don’t come across many books set in New Zealand, thanks for sharing!

You're welcome, Shelley Rae. And, this one is worth reading!

I agree with you Lesa and I found this book quite interesting. The setting was very vivid. I liked the main character well enough and I think my liking will improve as the series continues. Look forward to the next one.

I agree with you, Kay. I mentioned her impulsiveness to Sara. That did bother me a little. However, her background explains that. I'll look forward to the next one, too.

I found only one book in the whole statewide library system and put it on my later list. Thanks for the review.

Thank you, Lesa, for a generous review of Molten Mud Murder. Not only do I appreciate your kind endorsement for the Alexa Glock series, I am so excited to have found your blog to read about new books. Kia ora (Maori for 'wishing the essence of life upon you).

Glen, I hope you and Gram both get a chance to try it. And, Gram? It's brand new, so maybe some of the libraries will get it in a bit.

Sara, Thank you for taking the time to answer questions. The post went up on Poisoned Pen's blog, and had a good showing there as well. Good luck!

Thank you for the Maori blessing!