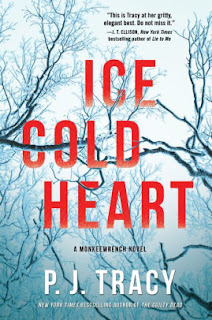 I always look forward to P.J. Tracy's Monkeewrench novels. Ice Cold Heart, the tenth book in the series, may be one of my favorites. Those of us who are fans of the Monkeewrench team will appreciate the focus on Roadrunner, with a glimpse of his past.

Winter is so cold in Minneapolis that the homicide detectives have had a reprieve for a month. But, a new murder scene makes up for the recent quiet. Detectives Leo Magozzi and Gino Rolseth are called to a house where Kelly Ramage's body was found. She was brutally slain at a friend's place while the friend was out of town. Kelly was recently experimenting with bondage, and the crime scene doesn't look like a random killing.

The scene is particularly disturbing because a self-proclaimed psychic predicted Kelly's death, but she didn't have a name or location. Then, the psychic is found dead. The two women are linked through a third woman, a neighbor of Roadrunner's.

The investigators do everything they can to dig into Kelly Ramage's recent past. But, another woman may actually have the key to discovering the killer. Together with Monkeewrench, Magozzi and Gino discover a tangled web that connects the world, and leads back to Minneapolis and a savage killer.

Ice Cold Heart has an intricate plot with multiple storylines that weave together. There's a disturbing backstory. But, for many of us, I'm sure the book will be enjoyed for bringing together the police officers and the personal lives of the Monkeewrench team, a cast of characters that have grown to be familiar over the course of the series, despite the sometimes gruesome crime scenes. There's something comforting about knowing Magozzi, Rolseth and Monkeewrench are on the case.

Can't wait for this one. Magozzi and Geno are favorite characters.

I love the relationship between Magozzi and Geno, Jeff.

I love this series...and was saddened by the loss of her Mom. I hope this will include the new baby!!!

One of my very favorite series and I always stay caught up with it. Very much looking forward to this one. My husband and I will probably listen to it on audio on our next trip. He loves the series too.