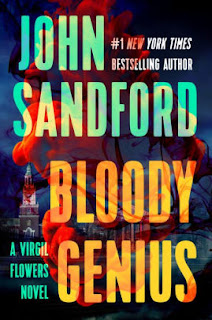 John Sandford is a bloody genius. I wish I could tell you how he messed up my book review for Bloody Genius, the twelfth Virgil Flowers novel, but it would spoil the book. In fact, that's what happened. I had an opening sentence all set after I read the first five pages, and then the conclusion preempted my opening. How would I know my opening sentence would have been a spoiler for the end of the book?

After Professor Quill's body is found in his library carrel at the University of Minnesota, the police are stumped. They can't find a murder weapon. There is no evidence of another person with Dr. Quill, so no witness. What was the man doing in the library over the weekend? When nothing happens in the case for two weeks, Quill's wealthy, well-connected sister calls a friend, the governor. Eventually, the chain of command produces Virgil Flowers from the Bureau of Criminal Apprehension (BCA).

Virgil teams up with Sergeant Maggie Trane of the Minneapolis Homicide Dept. as they question possible witnesses, suspects, and people who seem to have a peripheral involvement. However no one is actually peripheral in this riveting page-turner. In fact, there are humorous side meetings with a man in a bar, Harry, and the bartender, Alice. Harry has his own theories about the case, theories developed from years of watching Gibbs on NCIS.

As always with a Virgil Flowers case, it seems to be an intricate mess that finally comes together in a fast-paced conclusion. Bloody Genius contains the family connections and insight to Flowers' character that add interest to the man. Sandford's readers will not be disappointed in the most recent darkly humorous investigation. Only those of us who are impatient and think we're clever will be disappointed in our own wit.

As I said, Sandford is a bloody genius.

Writers do make the world a better place
https://sabunlicin.com/