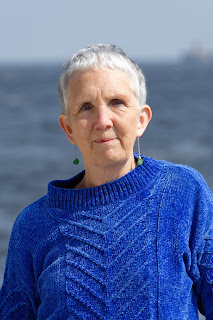 You might be familiar with Ann Cleeves' books in the Shetland Island series, or her Vera Stanhope series. Maybe you've watched "Shetland" or "Vera". Cleeves has also written other books. She just released the first in the new Two Rivers series, The Long Call. I reviewed it earlier this month, http://bit.ly/2kGe1r1.

It's truly an honor to interview Ann Cleeves. The interview might have appeared closer to review date, but I couldn't believe I was invited to ask her a few questions, so I didn't answer right away. I'm grateful, and in awe. I hope you enjoy the interview.

I feel a little funny asking you this question, but some of my readers may not be familiar with your work. Ann, would you introduce yourself to readers, please?

I’m a crime writer who’s been very, very lucky.  For the first twenty years of publication, I had very little commercial success.  That meant I could practice my craft without any pressure at all and I still had time to spend with my daughters as they were growing up.  Writing was an escape and a joy – and it still is. In those early days, I was supported by libraries and by my family. For more than forty years I was married to Tim, an ornithologist, who spent his career working for a conservation charity.  I met him in Shetland and his work took me to some of the beautiful places that act as a backdrop to my stories. I still live in my little house in Whitley Bay, a seaside town on the north-east coast.

Your best-known books are set in the Shetlands and Northumberland. What attracted you to Devon for your new series?

I grew up in North Devon and I still have friends there.  When my husband suddenly died, nearly two years ago, I needed to run away, not just from the memories of our life together, but from the sympathy of the people who’d known us as a couple.  I ran to my old school friend and to a place I’d been very happy. We visited some of the beautiful beaches and small towns of my youth and talked for hours about the people we knew then. The Long Call developed out of those places and those conversations.

Would you introduce us to Matthew Venn?

Matthew grew up in a small evangelical community as the beloved only son of doting parents.  When he was eighteen, he lost his faith, at least the very rigid faith of his parents and he was cast out.  His way of dealing with the sudden lack of order was to join the police force. There he found the sense of duty, honour and service that he’d grown up with.  At the start of the novel, he’s looking in at the funeral of his father, not feeling that he’d be welcome to join in. He’s back in North Devon after living and working in the city of Bristol, and this is his first case in the Two Rivers region.  He’s more optimistic now, happier, married to Jonathan and living in the low, white house on the shore. I’m hoping that in future books, he’ll develop more of a sense of humour!

Tell us about The Long Call, without spoilers, please. 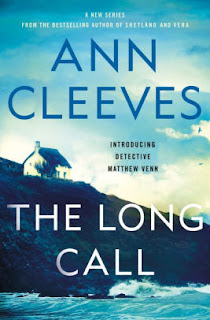 The Long Call begins with the body of a man found on a beach, Crow Point, a spit of sand at the point where the rivers Taw and Torridge meet.  At first the detectives think that the victim is a homeless man, but it seems his background is complex. He volunteers at The Woodyard, a community arts centre with a space for adults with a learning disability.  The Woodyard becomes the centre of the investigation, which makes life difficult for Matthew, because Jonathan was the leading light in creating the place, and he’s now the manager.

This is just my opinion. I see Jimmy Perez, Vera Stanhope, and, in The Long Call, Matthew Venn and his sergeant, Jen Rafferty, as troubled people, somewhat socially awkward. How do their experiences make them better investigators?

One of my favourite crime writers, Georges Simenon, says that the role of his detective, Inspector Maigret, is ‘to understand not to judge.’  It’s much easier to understand the pain of the victims’ families and the motives for murder, if the detective hasn’t had a trouble-free and undemanding life.  Like writers, I think good detectives have to be a little apart: observers, good listeners.

This will be your third series, after “Vera” and “Shetland” that’s adapted for television. What appeals to you when you see your characters and settings portrayed on screen?

Television is a very different form from prose and I’m delighted to leave the script-writing to the people who know what they’re doing!  I don’t feel precious about the adaptations. Once the books reach readers, they don’t belong to me any longer. Reading is a creative activity, and each reader brings their own history and prejudice to the story, the images they see in their minds will be different from the ones in mine.  Letting a TV production company interpret the novels, is just one step further in the process. Both Shetland and Vera are made by Silverprint Pictures and I think I’ve been very fortunate. The company has captured the atmosphere, place and central characters beautifully. I’m delighted that Silverprint has optioned The Long Call too.  I watch the shows like every other viewer.

I went to my local library and looked at the books most similar to mine and made a note of the publisher.  Then I sent out a letter and script. In those days, publishers still looked at unsolicited manuscripts and the third company I approached bought the novel.  It’s not that easy now!

Even though we might not recognize some of the titles, what books were your favorites as a child?

I loved mysteries even as a child.  My favourite author was Malcolm Saville, who was great at writing place.  I very soon moved on to the short stories of Conan-Doyle and G K Chesterton.

Ann, I’m a librarian. I usually end with this question. Would you tell me a story about you and a library or librarian?

I love libraries and think we should all fight to celebrate and preserve them.  Libraries are more needed now than they ever were – we need a place where truth can be kept and where we can escape into fiction and see the world through other people’s eyes.  When I was a child, the librarian in the little town where we lived was called Mrs Gregory. She knew which books I liked and kept them for me, then she’d bring a copy from behind the counter, as if she were a magician pulling a rabbit out of a hat.  When I worked in public libraries, we did a brilliant event called Teenage Kicks, bringing 60 teens into the building to explore books through the arts. It was exhausting but totally exhilarating!

*****
Ann, Thank you so much for taking the time to answer questions.

Thanks, Lesa. Good interview. She has been pretty lucky (IMHO) with the television adaptations of her books.

I agree, Jeff. Or, Silverprint Pictures does an excellent job.

I'm reading her new book right now and enjoying it. I read all of her others and was waiting for this one. Great writer - hope she writes many more.

I agree, Donna. I hope she writes many more, too.

Great interview, Lesa! I know you were excited to get to ask Ann those questions. I've been fortunate enough to get to meet her twice and have a little conversation with her each time. She told me both times about her passion for libraries and how important they are. When she learned that I had worked in a library here in Austin, she asked me a bunch of questions (which thrilled and terrified me!) regarding how our libraries did things in Austin. Glad to hear that this new character will be made into a TV person and I'll watch for that. Now to read this new books - I'm kind of waiting a bit and will have it as a treat.

Oh, I think you'll like it, Kay. It's another terrific book from Ann Cleeves. I've never met her, but she does seem to be passionate about libraries. And, she was kind enough to Tweet today and say she enjoyed the interview.

Any author who loves libraries is one for me...I must look into this new series. Thank for the great interview.

Ann's Shetland books were an inspiration for me. And we share a love for classic crime and Georges Simenon. What a lovely woman and a terrific interview. Thanks, Lesa!