A Night's Tail by Sofie Kelly 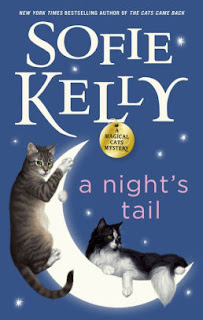 I wanted to like Sofie Kelly's latest Magical Cats Mystery as much as I did The Cats Came Back. But, the large cast of characters in A Night's Tail did me in. There were too many characters in the opening scene, and I never felt as if I caught up with them. However, fans of the series will want to catch up with librarian Kathleen Paulson and her two magical cats, Owen and Hercules.

Kathleen's younger brother, Ethan, is in town with his bandmates in The Flaming Gerbils. She, her boyfriend, police detective Marcus Gordon, and other friends are all at a bar when they witness a drunken businessman harass a veteran and his service dog. It's one of the band members, Derek, who intercedes. So, when Lewis Wallace, that business investor, is found dead in a hotel meeting space, Marcus wants to talk with Derek. Ethan blows up, and demands that Kathleen investigate. She insists Marcus is a fair man and an excellent detective, but that doesn't pacify Ethan. It's only when Derek returns, and Marcus later reveals there was a witness who saw Derek, that Ethan calms down.

It's hard for a librarian to avoid research, though. With Hercules' help and a few pointers from townspeople, Kathleen learns about Wallace's past as a college player accused of cheating in classes, a Canadian football player, and a failed businessman. It seems a number of people might have had reasons to want the man dead. And, the more she probes, the more Kathleen discovers that some of the locals might have had those reasons.

While the mystery itself and the characters seemed confusing, Kathleen is an interesting amateur sleuth. It's finally time to tell Marcus about the magical cats, and she has to work herself up to it. She's a caring, empathetic woman who feels for the suspects, and cries when she realizes who the killer is.

A Night's Tail might not have worked for me, but I'll certainly read the next in the series. I want to watch Kathleen's continued growth, her friendships and relationships. Of course, I also want to see what's happening with Owen and Hercules.

I did like this book but I agree that it has a few too many things going on.

Yes, it does, Sandy.