Twisted at the Root by Ellen Hart 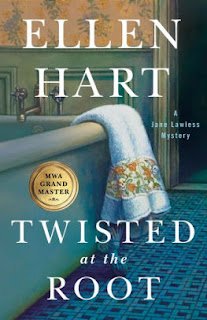 I am not a fan of unreliable narrators in books. Ellen Hart does not feature an unreliable narrator in her latest Jane Lawless mystery, Twisted at the Root. However, I don't know when I've met such a dislikable cast of lying suspects.

Rashad May and Gideon Wise seemed to be happily married. However, when Gideon was murdered in their apartment, Rashad was found guilty and sent to prison for his husband's death. Now, four years later, Rashad's brother claims to have uncovered evidence that his brother was not guilty, that someone else was in the apartment that night. He takes it to Rashad's former lawyer, Ray Lawless, and asks him to examine the evidence and reopen the case.

It isn't as easy as Sherwin May thinks to reopen a homicide case. Ray asks his daughter, Jane, a restaurateur and part-time private investigator, if she'll look into it after she sees the evidence. Jane, who, like her father, believes that "truth existed and mattered", is willing to dig for answers and ask questions of the people who were involved at the time. The trail leads her to Gideon's daughter and son-in-law, and then to the family of fine art consultants who own J.H. Chenoweth Gallery. Marlo Wise is unwilling to cooperate with Jane, but her husband, George Krochak, is willing to talk about that night and that period of time.

When Jane talks with the Chenoweths, she finds a family with secrets. And, to her shock and horror, her brother, Peter, was once deeply involved with all of them. Peter's home from London, where he unexpectedly left his wife and daughter, but he won't talk about family issues. He won't cooperate with Jane's investigation of his friends, either.

It's been a number of years since I read one of the Jane Lawless mysteries. However, Hart still excels at mixing Jane's friendships and personal relationships with the mystery itself. They may have little to do with the mystery, however, as in the best mysteries, those personal relationships develop the character and keep them grounded in reality. While she investigates the cold case, Jane also deals with the return of her former lover who is now struggling with a cancer diagnosis. I have to admit, though, that Cordelia Thorn, theater creative director and Jane's best friend, is hardly capable of keeping anyone grounded. She's always been the comic relief in this series.

Despite the suspects (and, why shouldn't suspects be dislikable?), Twisted at the Root is a complex, intriguing mystery. Ellen Hart, named a Grand Master by Mystery Writers of America, is still at the top of her game with this latest investigation.

That's how I feel lately when watching episodes of MIDSOMER MURDERS on Netflix. Some of these shows have absolutely no characters who aren't unlikable liars, even when they aren't involved in the murders. Surely these villages must have some nice people?

Yes, Jeff! That's it. Even Jane's brother was keeping secrets and not telling the whole truth. Everyone!