The Wolf Wants In by Laura McHugh 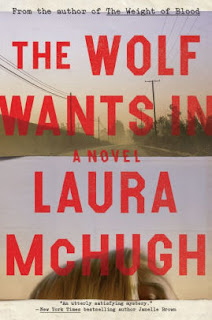 Laura McHugh's latest novel, The Wolf Wants In, has a tone of desperation. It's a complex, large, messy family story, told by two desperate women in a community ravaged by the opioid crisis.

Sadie Keller is one of the narrators, desperate to find out how her brother died. In Blackwater, Kansas, too many deaths are because of opioids, but Sadie knows her brother wasn't an addict. He died at thirty-six, but the local police force is too busy to investigate one more death. A child's skull was found in the woods, and they're investigating that. Shane's death is just one more filed under drugs. To the police, he was a troublemaker. To Sadie, he was her protector. And, she mourns his death as much as his dog, Gravy, does.

At eighteen, Henley Pettit is used to coping with addicts and drunks. Her family is well-known in Blackwater as drunks and delinquents. Henley's uncles may try to help her mother out, a woman who relapses, disappears, and comes back, but Henley knows the men in her family are responsible for some of the drugs in the community. They're dealers, even though they want Henley to make something of herself. She wants to leave Blackwater, "where everyone knew she was a Pettit and what that was supposed to mean".

There are two timelines in this tortuous story. Henley's account starts in July before Shane dies. She knows more than anyone suspects. Sadie's account starts in November, a month after Shane's death. And, the narrations tangle together into a story of a troubled community, as both women uncover secrets and lies.

McHugh excels at creating the atmosphere of this community. Her writing draws readers in. Henley's raw feelings about Blackwater, and the life there evokes that feeling of desperation. "She'd felt it, too...the vacuum that threatened to swallow anyone who didn't leave right away. She was mired in small-town purgatory, a lonesome in-between that drove people to have babies or pop pills or take a job shoveling grain, anything for the sensation of moving forward in a place you couldn't escape."

You can't escape the raw emotion, the desperate atmosphere in Laura McHugh's The Wolf Wants In. She's written a troubling, powerful book of our time.