The Truth Behind the Lie by Sara Lovestam 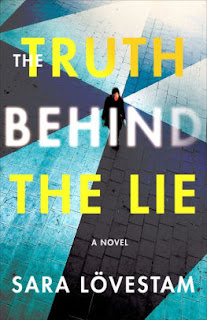 Sara Lovestam's detective story, The Truth Behind the Lie, has several unusual twists. One of
them will surprise readers in the very last line of the book.

Kouplan is desperate to make ends meet in Stockholm. The undocumented Iranian refugee risks everything by placing an ad in the local paper. "Private detective. If the police can't help, call me!" Pernilla calls immediately, saying her six-year-old daughter, Julia, is missing. She can't go to the police.

Kouplan is used to hiding from authorities. Despite his own fear of the police and deportation or prison, he returns to the scene where Julia disappeared. Kouplan questions a number of people about the missing girl. He fumbles through his first job as a private detective, learning on the job. But, as he studies Pernilla, and looks for the missing child, something in Pernilla's account doesn't ring true.

The suspenseful story slowly unfolds through the eyes of Kouplan, Pernilla, and a young girl held captive. Each character reveals pieces of the truth, bit by bit, until the stunning final sentence turns the reader's beliefs upside down.

The Truth Behind the Lie is an unusual character study of two needy people. They find strength in each other, despite their secrets. Readers who appreciate complex mysteries that unfold carefully will appreciate the twists in this book.

Sounds like the kind of book I'd like - I just put a reserve in on it - book is on order. I like Scandinavian background stories. I worked for an importer and we dealt with Denmark and Sweden so I've always had an interest in the area.

I hope you enjoy it, Donna. More important - have you ever been to Denmark or Sweden? I haven't. Just curious.

No I haven't been there. Both countries are far more advanced re taking care of their citizens than the USA. All workers have unbelievable guaranteed vacation time, health care, senior homes etc. and this goes back many years. Of course, in Sweden they battle the elements which makes for good mysteries. Another writer I like is Jussi Adler Olsen (not sure if I spelled it correctly) don't know if you've read any of his but give him a try.

Lesa, we've been there. We were impressed too. Copenhagen has great ice cream! (That's not why we liked it, though it didn't hurt.) We went to Tivoli Gardens a couple of times. Also went on the "Life Tour" (can't remember the actual name) where they take you around showing you the "cradle to grave" care everyone gets there. We took a tour around the country, went to Roskilde and Kronborg Castle in Helsingor, better known as Hamlet's Castle. It is a short ride across the sound to Helsingborg, Sweden.

We've also been to Stockholm once (we were in Copenhagen three times), and visited the Wasa (now called Vasa), a Swedish warship that sank in the harbor on its maiden voyage in 1628 and was brought up in 1961. And Skansen, the open-air museum.

We also had a shorter visit to Oslo, home of Frogner Park and the amazing Vigeland Sculptures.

So glad we traveled a lot when we were young and had more energy.

I haven't read much in the way of Scandinavian mysteries, so I appreciate your suggestions, Donna!

Jeff, I wish I had traveled more when I was younger. Your stories about Scandinavia are fascinating. I would have appreciated the "Life Tour", and definitely the ice cream!

I love books that are able to surprise me right up until the very last page, but all the way to the last line is pretty amazing. I just read one by Richard Russo (Chances Are) in which he revealed major plot details or character development in single sentences when you least expected them. I found myself going back and re-reading those sentences immediately to make sure that I understood them right. I suppose the danger is that someone reading a little too quickly would miss them completely - and they really were important.