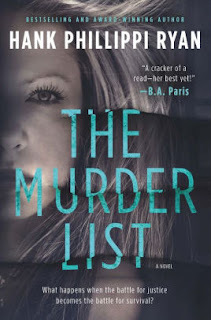 When I selected Hank Phillippi Ryan's The Murder List as the Pick of the Month for Library Journal, I knew fans of legal thrillers would appreciate the unusual twists in the book. She manipulates the reader as well as the characters. The book is easier to summarize than to review, and, even then, it's difficult to do without spoiling the surprises for the reader.

Ryan's story is about three characters, Rachel North, her husband, Jack Kirkland, and Jack's adversary in the legal system, attorney Martha Gardiner. A second-year Harvard law student, Rachel's ambition is to be Jack's law partner in Kirkland and North, defending those accused of crimes. When defendants turn up on the Murder List, she hopes to defend suspects who cannot afford an attorney.

By accepting a summer internship with Assistant DA Martha Gardiner, Rachel puts herself in the middle between the two enemies. Rachel relates the account of her internship, a story that unfolds in the present. However, the past is also essential to the plot.

Rachel North was once chief of staff to Tom Rafferty, the president of the Massachusetts senate. When an assistant in Rafferty's office was killed, there was a scandalous arrest. Jack Kirkland handled the defense in a battle Rachel witnessed in court between Jack and Gardiner.

The entire book is a battle, a masterfully plotted legal thriller with a twisted ending. It's a riveting, character-driven story. Those who appreciate stories with unreliable narrators will discover that none of the three characters, Rachel, Jack, or Martha, can be trusted to tell the whole truth.

The verdict? Guilty. Hank Phillippi Ryan is guilty of inciting shock. She's a skillful storyteller who manipulates the reader and the characters. The Murder List is a must-read for fans of legal thrillers.

She is one of my favorites - can't wait to read it.

Terrific review for a terrific book!!!

Tomorrow is release date for The Murder List, Donna.

Thanks so much Lesa - I just put a reserve on it.

You're welcome, Donna. I hope you enjoy it!