The Man Who Wouldn't Die by A.B. Jewell 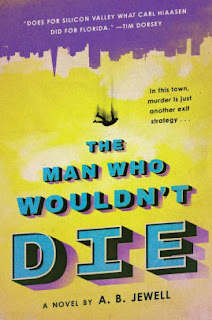 I just found A.B. Jewell's novel, The Man Who Wouldn't Die, to be confusing. I'm usually a fan of detective novels, but much of this one was just odd.

In Silicon Valley, where everyone is into technology, one dinosaur still exists. William Fitzgerald, aka Fitch, is a world-class detective. That's why Tess Donogue turns to him after the death of her father, Capt. Don Donogue. Capt. Don was an eccentric genius, a technology legend. Tess claims he was designing a Spirit Box that allows people to send messages after they die. She insists her father is only "deadish" because she's getting messages from him saying his death wasn't an accident. Tess throws money at Fitch so he'll investigate.

For Fitch, the investigation means he questions everyone who appears too interested in the Spirit Box. At the same time, he's fighting off a gang called the Tarantulas. When the Tarantulas kidnap Fitch's husband to pressure him to turn over the box, nothing will stand in Fitch's way.

Fitch fits the mold of every hard-bitten, world-weary detective, as long as that detective is gay with a loving six-foot-two husband at home.There's nonstop action and humor in this over-the-top mockery of Silicon Valley and the pretense that innovation and technology are everything. At the same time, the detective novel is confusing.

Jewell is a pseudonym for a Pulitzer Prize-winning technology reporter who throws all his knowledge into this book.

Have not read this book. But, I have read many such books written by reporter experts who dump everything they know into the book and thus ruin the read.

I don't know that you'd really want to read it, either, Kevin, but, if you want it, let me know, and I can send it your way.