Terns of Endearment by Donna Andrews 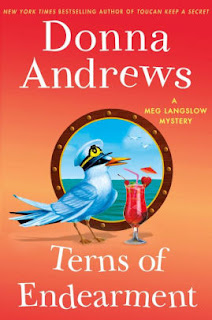 I admit that my sister is the big Donna Andrews/Meg Langslow fan in the family. However, in Terns of Endearment, there was less outrageous behavior than I expected. Meg was a capable, organized amateur sleuth, and she handled a terrible crisis with aplomb.

When Meg Langslow's grandfather, Dr. J. Montgomery Blake, signs on for the cruise ship lecture circuit, his contract allows him to bring others along. Fifteen members of the family and his team accompany him. Trevor Ponsonby-West, his assistant, tried to convince him not to travel with the small new cruise line, Pastime, but Blake is stubborn. Everything Meg sees convinces her that Trevor was right. And, where is Trevor anyways?

On the first night of the cruise, Meg spends time with members of a writers' group. When a diva shows up at dinner, the writers tell her they're convinced the woman caused the suicide of one of their friends. By the next morning, a crew member finds evidence the diva jumped off the ship. The captain calls it suicide, but before Meg and her father can investigate, or convince the captain the death warrants an investigation, the ship stalls on its way to Bermuda. The captain provides a lame excuse, and it isn't long before crew members are hard to find. There's no electricity, and no flushing toilets. Meg and her mother rally the passengers to take over the ship, but Meg is actually more interested in looking for missing people and bodies.

Terns of Endearment takes place in only a couple days, but it's slow-paced for almost half the book. It picks up speed, and interest, when the passengers take over the operation of the ship. The mystery is filled with interesting characters, a large cast that's skillfully utilized in the twenty-fifth book in the series.  While I thought the book wasn't bad because I don't often read the series, my sister was disappointed in the book with most of the family actually sidelined and the focus on Meg.

Thank you for this Lesa. I've read the whole series but lately I find them hit or miss. I am picking it up at the library today. I will keep you posted.

Have a great weekend!

Thanks, Sharon. Let us know what you think.

I met Donna Andrews at Writers' Police Academy MurderCon two weeks ago in Raleigh. She said she had to go on a cruise for "research" for Terns of Endearment!

I'm about a third of the way into it and am finding it delightful because of the cruise setting and the four authors. I'm not really noticing a dearth of Meg's family interactions which I find deftly inserted into the action.

And, then there are all the authors going to Paris for "research", Sara. (sigh)

Cyanetta, My sister complained that the twins only seemed to play games and the father was watching them all the time. I read it, too, but because I'm not a regular reader of this series, I didn't know it was any different.

I like her Turing Hopper series better even though there are only 4 of them.

I suppose it's because Michael and the twins aren't particularly idiosyncratic in the way Rose Noire, Cousin Harold, her parents and grandparents and her mother with a deft way of using Louboutin shoes as a conversation directional gambit.

Also loved the Turing Hopper series, and particularly given recent technological directions, it was cut off way too soon.

I agree, Cyrantetta. It was cut off too soon. And, thank you for the additional comment about the characters.

I love the Meg Langslow series but I found this one to really be lacking in depth. I was so disappointed. Like many who have a long running series, it seems they get to a point where they start "phoning" it in.