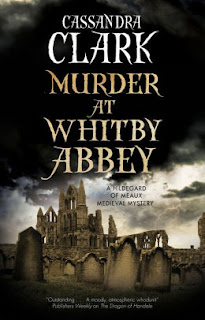 As a reviewer who gets thrust into the middle of a number of mystery series, I'm getting to be an expert in whether or not readers can pick up a book if they haven't read previous ones. Murder at Whitby Abbey is the tenth in Cassandra Clark's Hildegard of Meaux Medieval Mystery series, and there's no reason you can't start with this one. I always wish I could have started with the first book, though.

In 1389, Hildegard is a widow with a fifteen-year-old son. She's also a nun assigned a penance by the Abbot because she was caught with her lover. He sends her to the Whitby Abbey to barter with the Benedictine monks for a relic, a lock of hair from Abbess Hild of Whitby, a relic kept for over 600 years. While Hildegard is a practical woman who can't believe an actual lock of hair exists after all that time, she sets out accompanied by two monks militant, who had been on Crusades to Jerusalem, and a young priest. Gregory and Egbert, the two monks, are friends and allies. Hildegard will need both. She arrives at the Abbey during the celebration of the 12 days of Christmas, only to discover other abbeys have sent people to bid on the relic as well.

When the body of a young monk is discovered in an apple storage building, suspicion erupts within the abbey. Hildegard and her allied monks begin an investigation. At the same time, their young priest becomes interested in a woman who has been driven from her home in town. The naive young man doesn't understand the customs, but he finds himself caught up in the tension between the abbey and the town. The conflicts sometimes turn violent as the abbey is the town's landlord, demanding money when the people don't have it.

It's fascinating to read of the politics and history of the period. However, there's a reason I seldom read historical mysteries. I get caught up in the research, checking sources for the facts. I often find the actual history more intriguing than the mystery itself. I found myself checking dates for the Crusades, reading up on the history of the time period, including York, England. Maybe not quite what Cassandra Clark intended with the latest Hildegard of Meaux mystery, Murder at Whitby Abbey.

Whitby reminds me of Dracula

Sandy, we've been there (to buy books, of course) and I thought of Dracula every time.

Sandy, I thought your note was funny until I read Jeff's. Now, it's not so funny. Thanks, Jeff!

This one sounds good. I'm not familiar with the series, but I've had the same experience of being drawn to research the period in a couple of other historical series I've read, so I know just what you're talking about. I suppose, in a way, that's a compliment to the book's author for making the period so real that I had to know more about it.

I wasn't familiar with the series either. I think you're right, though, that it could be considered a compliment.

I seem incapable of reading a series in order, so I always appreciate books that can be read on their own.

Oh, I'm going to have a good one for you in November, Glen. I wish I could share it right now.