Mrs. Morris and the Ghost by Traci Wilton 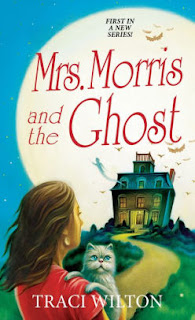 If you're a fan of Cleo Coyle's Haunted Bookshop mysteries, or loved J.J. Cook's Sweet Pepper Fire Brigade series, I have a book for you! I'm a sucker for those paranormal cozies in which a female amateur sleuth falls for the ghost of a good-looking man. Traci Wilton launches just such a series with Mrs. Morris and the Ghost.

After Charlene Morris' beloved husband is killed by a hit-and-run driver in Chicago, she takes all her money and buys an 8,000 foot estate sight unseen in Salem, Massachusetts, with plans to turn it into a bed-and-breakfast. It needs some work and a lot of furniture, but Charlene's in love with the place. At least she is until the middle of the first night in her new home when she wakes up to find a good-looking man standing over her bed. He swears he won't hurt her. He's Jack Strathmore, Dr. Jonathan Benjamin Strathmore, Jr., and he needs her help. He owned the house until his death three years earlier. He can't remember the events leading up to his death, but he wants Charlene to find his killer.

Charlene is at a disadvantage. She doesn't know anyone in Salem, and doesn't know Jack's past, but, if she doesn't investigate, he just might ruin her chance to operate an elegant B&B. Although even the handsome police detective Sam Holden claims Jack died after falling down the stairs when he had a stroke, Charlene finds that odd for a forty-seven-year-old man. And, there was no autopsy. Jack's wife, Shauna, was a social climber who married Jack's best friend shortly after his death. While some of Jack's friends reluctantly talk about him and answer questions, Shauna refuses to meet her. And, then Charlene finds a body.

There's so much to enjoy if you're a fan of this type of cozy mystery. Readers get to know what Jack thinks of Charlene, not just what Charlene thinks. Jack isn't a meek ghost; he has a temper, and he displays it when he's upset about Charlene's sleuthing. There's a Persian cat that shows up, the only other creature that can see Jack. While the killer might come as a surprise, there are hints several times. The author plays fair with the reader. I appreciated the fact that Charlene and Jack are mature, both in their 40s, people who enjoyed their lives. They're not youngsters just starting out. Charlene might have asked too many questions for her own good, but it's hard to see what choice she had unless she wanted to lose her investment in the house.

When it comes right down to it, I'm a fan of this kind of mystery. I can't wait to read the second book, Mrs. Morris and the Witch.

I found it in paperback at the library and put it on my sometime library list. It sounds like a fun read.

I have a hold on this at the library

Gram & Sandy, It is a fun read. Just what I needed while feeling mopey after my family left.

Lesa, thank you so much for this wonderful review!

Loved the book & your characters, Traci!