Love and Death Among the Cheetahs by Rhys Bowen 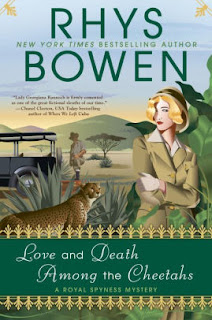 In the course of the Royal Spyness series, Rhys Bowen's books have grown a little more serious. The two books that foreshadow World War II, including this one, Love and Death Among the Cheetahs, are quite serious.

After a short honeymoon on a houseboat, Lady Georgiana's new husband, Darcy O'Mara, surprises her with a honeymoon trip to Kenya. He finally admits he's going on assignment to catch a jewel thief, but Georgie had to push him for that confession. She suspects there's more to it than that, but doesn't push him any more immediately. And, Georgie herself has an assignment from Queen Mary. She wants her to keep an eye on the Prince of Wales because she suspects him may try to elope with Wallis Simpson.

The newlyweds head for Happy Valley, where the upper-class English live close enough together to party with drinks, drugs, and wife-swapping. Georgie is angry when she's propositioned on her honeymoon. She's shocked to observe the behavior of the upper-class. She stops Lord Cheriton's loutish behavior. However, when she and Darcy sneak out of the party early in the morning, they find him murdered along the road. Almost everyone had a motive to want him dead, but Georgie is the one who discovers the truth.

As in the award-winning author's eleventh in the series, On Her Majesty's Frightfully Secret Service, Bowen takes a serious turn. She focuses on the depraved lifestyle of the English in Kenya, but does include a safari and air travel. Fans who read the books for the light humor may be disappointed. However, those readers who appreciate Bowen's knowledge of the pre- and post-war years, such as in In Farleigh Field, will be receptive to the atmospheric historical details.

I recommend James Fox's WHITE MISCHIEF - which was also made into a movie that is worth seeing - for more about the Happy Valley set. And the 1998 British series HEAT OF THE SUN dealt with them too.

Frankly, Jeff, I had enough of them with this book. (smile)

No, I totally agree. A little of those awful people is enough.

You're so right, Jeff.