Iced in Paradise by Naomi Hirahara 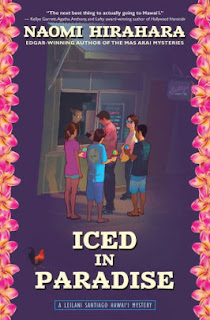 Edgar Award winning author, Naomi Hirahara, sets her new series in Hawai'i, the spelling she uses in the first book. It takes a little time to adjust to the language usage; the Pidgin, Hawaiian, and Japanese words and sentence structure in Iced in Paradise. Fortunately, Hirahara provides a glossary because I found myself checking words frequently while I read the mystery.

After five years in Seattle, Leilani Santiago returns home to Waimea on the island of Kaua'i in Hawai'i. Leilani's mother has multiple sclerosis, and the young woman wants to help her grandmother, parents, and sisters with their small business, Santiago Shave Ice. However, Leilani is restless, and doesn't yet feel comfortable back at home.

When Leilani's father returns home, bringing Luke Hightower, his surfing protege, she's a little resentful. Despite having four daughters, Leilani knows her father always wanted a son. Now, he's spearheading a surfing competition as a fundraiser, and Luke is his star. However, Luke breaks the news that he signed a contract with a different clothing company. Leilani's father is angry, but is he angry enough to kill the young man and leave his body in Santiago Shave Ice?

Leilani doesn't believe her father is guilty. When he's arrested, she finds herself juggling the family business, a long-distance relationship with her boyfriend, and a budding friendship with her landlord, with the search for a killer. The mystery shines a light on the native Hawaiian issues with land, and emphasizes the Hawaiian culture.

At times, Leilani comes across as immature and self-centered. But, she's growing into her responsibilities. The story of family loyalities, surfing and the distinct lifestyle may appeal to new adult readers. Mystery readers interested in Hawaiian culture will also enjoy the story if they can adjust to the language usage.