Have You Heard? Julie Hyzy's Affairs of Steak

Friday morning was my monthly review deadline for Library Journal, so I only now had the chance to start a book that doesn't come out in October or November. You'll get to read reviews of those books when the time comes. Tomorrow, I'll have one of my reviews up. In the meantime, I am always grateful that Sandie Herron is willing to review an audiobook. As I've said before, I know many people like to listen to them while cleaning, traveling, exercising, or just while at home. Thanks, Sandie, for reviewing audios for us. 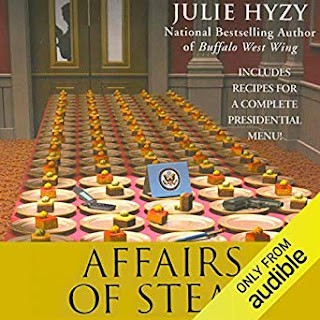 White House Executive Chef Olivia “Ollie” Paras has been called upon to help the First Lady’s assistant plan a surprise birthday party off-site for the Secretary of State.  To do so, Ollie is paired with her least favorite White House official, Sensitivity Director Peter Everett Sargeant. Approaching the fourth possible locale, a voice cries out.  The man is Sargeant’s nephew Milton whom Sargeant does not get along with. After a quick visit, Ollie and Sargeant go inside the building, where they find the assistant and the White House Chief of Staff‘s bodies!  After calling local and White House authorities, they realize an assassin was on the loose and might come after them. Sargeant has another quick conversation with Milton upon leaving, when a man runs past them, bumping into them.  Could that have been the killer?

On her way home on the Metro that evening, a man named Brad continually tries to start up a chat with Ollie.  Ollie spots an older man asleep in his seat and wakes him so he can exit at his stop. He is confused and nowhere near his home.  Ollie uses him as her excuse to exit and gets him to safety. Later, after the man is taken home, Ollie discovers that the old man is the Secretary of State’s father-in-law.

Once the Secret Service learns of Ollie’s adventures that evening following the day’s discoveries, they assign an agent to her.  Multiple incidents over the coming days of loitering or break-ins to Ollie’s building and then her apartment follow. Could it be Brad?  Could it be the assassin? Then Ollie’s role in discovering the murders is leaked to the press, threatening her further. Special Agent in Charge Gavin takes a special interest in Ollie’s protection, with their friendship blossoming.

Back at work, plans go forward for the birthday party since it may bring the men of different political parties together in forthcoming agreements.  With no guidance from the First Lady’s assistant any more, Ollie and Sargeant must do their best to work with a social secretary for the large guest list, plan the menus, and facilitate the evening as interim organizers until a new assistant could be found.  They are even assigned a social aide on leave from his military position who is more hindrance than help.

Having never gotten along, as witnessed in earlier entries to this series, it is comical to watch Ollie and Peter Sargeant come to rely on each other.  With so many details going wrong, we do begin to wonder if this party will ever be held. Author Julie Hyzy keeps the plot moving, delving into much more than kitchen duties.  It is fascinating to learn more about the White House as well as the Secret Service. Narrator Eileen Stevens continues to wow me with different characterizations, never letting the pace slow.  This fifth entry in the White House chef mysteries is excellent, entertaining, and full of suspense.
Posted by Lesa at 3:00 AM