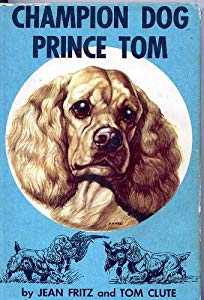 Champion Dog Prince Tom by Jean Fritz and Tom Clute is a book from my childhood. When a friend
recently asked me to post books I loved, I remembered this book, and ordered it. I read it over and over as a kid. I read it Friday night, and still appreciated it. For those of you who remember children's authors, yes, it's that Jean Fritz, the author who specialized in biographies and history for children. I actually met her when I was in grad school in Washington, D.C. I wish I had remembered that she wrote one of my favorite children's books.

Tom Clute was a small business owner of jukeboxes who also serviced them in Adrian, Michigan. When he saw an ad for cocker spaniel puppies, he mentioned it to his mother who was planning a surprise birthday party for him. One of his friends picked out a small blonde cocker, the runt and only blonde one in a litter of black pups. From the very beginning, the dog named Prince Tom III just tries harder.

Fritz catches the attention of young readers by incorporating a young boy in the story, Nathan Thompson, son of Prince Tom's veterinarian. He's the one who names Prince Tom, and foresees his future as a champion. Prince Tom started by quickly catching on to tricks. He becomes well-known in the local area for those, and loves the limelight when he appears on a children's TV show in Toledo, Ohio. When he goes for obedience training, though, he almost flunks out of his class. When Clute changes his method of training, Prince Tom catches on, and easily becomes the star of his next class.

I still find this book to be a heart-warming true story, the story of a runt, a small dog who just wouldn't quit, and found joy in working. Yes, it's a true story. Here's the article from The New York Times, under the title, "Field Trial Title to Prince Tom III". https://nyti.ms/31JqMkw

Champion Dog Prince Tom was an inspiring book for a child, and, as an adult, I still found it to be heart-warming.

I’ve never read that one but I still have my copy of Smoky the Cowhorse by Will James from when I was a kid. I still read it every 4 or 5 years and enjoy it. Not a true story though.

Isn't it nice, Sandy, to, once in a while, escape back to our childhood books?

I was just looking at my favorite dog book from my childhood the other day. Beautiful Joe by Marshall Saunders (actually Margaret Marshall Saunders, but published without the Margaret in 1894) is the story of an abused dog that is adopted by a loving family. It was the first Canadian book to sell a million copies. I still have my childhood copy published in the late 50s or early 60s. Maybe time for a reread.

I read Beautiful Joe, Kathy, I didn’t know it was Canadian or about the sales. Interesting!

I read and re-read Champion Dog Prince Tom when I was in primary school. (I grew up with several Cocker Spaniels too.) I think I still have my original book. My other favorite book was The Pink Maple House. I practically wore out the library copy. My husband gave it to me a couple of years ago after hearing me talk about it so much. Thanks for the walk down memory lane, Lesa!

Oh, Jane! You are so welcome. I loved this book, and I'm glad I tracked it down. I had a little black cocker as a child, but, unfortunately, I don't remember her. I never heard of The Pink Maple House. I'll have to check it out.

I read this as a kid and remember loving it! Thanks for the memory!

I still love it, Holdenj. It was worth tracking down and rereading.

Attention everyone, the file provided above is not working. I have been looking for the working file and finally found it.