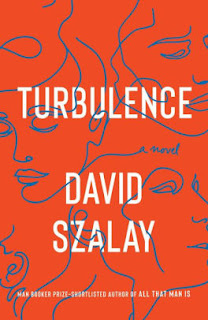 I guess I expected more out of David Szalay's novel, Turbulence. The summary statement, and the best part of the book, actually came from John F. Kennedy. "For, in the final analysis, our most basic common link is that we all inhabit this small planet. We all breathe the same air. We all cherish our children's future. And we are all mortal."

Mortality. Children. A small planet. They all come together in the story of fourteen people and twelve flights that take readers around the world. It begins with an unnamed woman who lives in Spain. She's the mother of a fifty-year-old man who lives in London, and she heads home after spending a month in his apartment while he underwent treatment for prostate cancer. It ends with that same man's daughter flying to London from Budapest to see her father after his treatment.

The flights take readers from London to Dakar, to Brazil, to Toronto, Seattle, Hong Kong, Vietnam, Delhi and Kochi in India, Qatar, Budapest and back to London. Each passenger covered has a family crisis before, during or after their flight. There's everything from death and the fear of dying, to family issues of abuse and theft.

While the flights link the passengers/characters, I just felt as if there wasn't enough information about most of the characters. I understand the concept of the interconnectedness of the characters, but the story fell flat for me. It's short, but I've read other novellas that managed to develop the characters better.

I'm sure this is just my opinion. Szalay's All That Man Is was shortlisted for the 2016 Man Booker Prize. Critics may say that the book provides enough depth for Szalay's premise, to illustrate the importance of fourteen lives, that people are connected, and that the world is a small planet that links all of us. Turbulence just didn't work for me as well as John F. Kennedy's quote did.

Lesa, sometimes I have to wonder, "Is it me?" when critics so highly praise a book that just doesn't do it for me. But each of us has our own taste, and I bet yours is a lot closer to mine than either of us is to the Booker Prize judges.

I think you're probably right, Jeff. I'm afraid I usually just don't "get" most literary fiction.