The Unhoneymooners by Christina Lauren 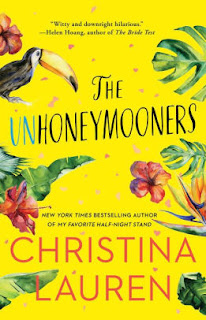 I don't know when I smiled and laughed as much when I read a romance as I did with Christina Lauren's The Unhoneymooners. The premise was fun, and the characters sparkled on the page. It was sexy and humorous, a terrific combination.

Olive Torres is maid of honor in her twin sister, Ami's wedding. Ami has planned everything, and Olive has a checklist. Ami also won everything including her honeymoon to Hawaii. What she didn't plan was the food poisoning at the reception. Olive is allergic to seafood. The groom's brother, best man Ethan Thomas, won't eat at a buffet. They are the only two who don't succumb to the food poisoning. So, Ami insists they take the honeymoon, ten days in Maui, even though Olive and Ethan can't stand each other.

Olive was originally attracted to Ethan when she met him several years earlier. But, she saw his reaction when she ordered cheese curds at the Minnesota State Fair. She assumed he wasn't interested in a short curvaceous Mexican-American woman who likes to eat. While she rushed to judgment, Ethan had also been attracted to Olive. But, Ethan's brother, Dane, Ami's boyfriend and later husband, warned Ethan against dating Olive. According to Dane, she has anger issues. The misunderstandings about their mutual attraction only come to light when Olive and Ethan have time together in Hawaii.

With Olive's forthright honesty and Ethan's admission of attraction, the scene could get hot soon in Maui. However, there's dinner with Olive's future boss and his wife. And, Ethan's ex-girlfriend, Sophie, pops up everyplace, although she has a fiancé with her. Olive and Ethan will each have to give a little if they're to make it together. But, can their relationship continue once they return home to reality?

The Unhoneymooners is a delightful romance with wonderful characters. Olive, Ethan, and Ami all show a great deal of growth in the course of the story. If you're looking for humor in a charming story, this summer's perfect escape is Christina Lauren's The Unhoneymooners.

I'm not familiar with the movies so I wouldn't know, Glen. It was fun, though!

I bought it after you mentioned it previously (I think it was you), but it will be a little while till I can read it because I just picked up 4 holds at one library and 3 more are waiting at my other library—I hate when that happens! Looking forward to reading it, though.

You talked me into it...I put it on that ever growing library list...so someday...

I do, too, Margie. You always need a back-up book, though, for the times when the library doesn't have anything for you.

Gram, You need a stamp that just says, "Someday."