The Stories You Tell by Kristen Lepionka 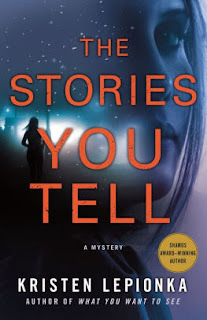 Although I often tell readers to go back and read the first in a series, Kristen Lepionka's The Stories You Tell, the third in the Roxane Weary series, is a fine starting point. However, her first book, The Last Place You Look, won the Shamus Award for Best First PI Novel, and was nominated for Anthony and Macavity Awards. Maybe interested readers do want to start at the beginning.

Andrew, Roxane Weary's brother, wakes the private investigator up in the middle of the night with an odd phone call. He says a little about a girl he knows, and then says it's just weird, and asks her to come over. When she arrives, he tells her Addison Stowe, a former co-worker who he slept with, pounded on his door, begged to come in and use his phone, and then fled. She seemed panicked. Roxane agrees to check on Addison. That agreement goes downhill fast.

Addison's roommate says she didn't see her, but knew she was there in the morning, and said she works nights as a DJ at a bar. When Roxane and Andrew go to Nightshade, a sleazy bar close to Andrew's, the bar is shut down. The loan shark who lent the owner money didn't know it was shut down. The owner has disappeared, along with a bouncer, and, of course, Addison. Although Roxane keeps the police in the loop about the missing young woman, Andrew is arrested. Then, a cop is found dead in the river. And, a former employee of the bar is shot by SWAT while at Addison's. What do they all have in common? A connection to Addison Stowe.

Roxane hears conflicting stories about Addison from her friends, her roommate, and other people Addison knows. But, along the way she learns about a dating app, BusPass, that Addison used. Did she meet someone there, and is that why she's missing? Roxane doesn't know if she should worry about the missing woman, or worry for the men Addison has encountered.

The Stories You Tell is a complex crime novel, a gripping pageturner. However, it's also a story with a complicated protagonist, a hard-drinking woman who is still suffering from the loss of her cop father. She has a hard time with relationships. But, she's an excellent private investigator, as anyone will see who picks up the latest Roxane Weary mystery.  Start with this one, or start at the beginning. If you're a fan of excellent writing and intriguing characters, you'll probably appreciate Kristen Lepionka's books.

I always try to start at the beginning of a series because I want to know as much as I can about the central characters as possible. Knowing what motivates them and what kind of people they are can make the plot so much more understandable, I think. Even when I jump into a series in the middle, I usually go back and read the earlier books before moving forward. This one sounds good.

This series seems to be on my eternal TBR pile. I will have to get the first one yet again. Gotta love libraries that let you take books out and keep them close to you.

So glad you enjoyed it, Lesa. It's waiting for me at the library. I loved the first two in the series.

I did enjoy it. I had no choice; I reviewed the third book for a journal. However, I recommended it to my brother-in-law, and he started at the beginning. I agree. That's where I like to start if I can, for all the reasons Sam said.

I put the first one on my library list...someday!