The Shameless by Ace Atkins 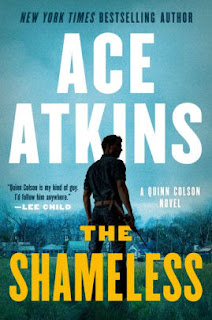 Ace Atkins' ninth Quinn Colson novel needs to come with a label, "Warning. To Be Continued..." If there was ever a book with a cliffhanger ending, it's The Shameless.

Twenty years ago, a fifteen-year-old boy, Brandon Taylor, went missing in the woods where he hunted all the time. When the body was found, Brandon's death was ruled a suicide. But, Brandon's family never accepted the verdict. Now, they've reached out to a podcaster, Tashi Coleman, and, according to her report, they asked her to come to Mississippi and find out what really happened to Brandon.

Sheriff Quinn Colson was only a teenager at that time, but his uncle was the sheriff in Tibbehah County. Although Colson is "a young crusading sheriff" coping with drug dealers, prostitution, and politics in a rural county county in northern Mississippi, he's willing to investigate and cooperate with Tashi Coleman when she arrives. But, Tashi's search for answers pushes Colson into the crosshairs of the Syndicate and the Watchmen.

The Syndicate is a group of good ole boys who have controlled the crime enterprises in the Deep South since the 1950s. But, they have competition now. Fannie Hathcock, a truck stop madam, wants her share of the state. She manages trafficking drugs, stolen goods, and young women. And, the Watchmen are a quasi-military group who protect and are always around a political candidate running for Governor, Senator Jimmy Vardamon, who is campaigning on states' rights, racism and ignorance.

It isn't going to be a comfortable place to live for ordinary people and Colson and his allies, if he loses his battle against powerful interests. But, Colson is willing to step out front as he investigates that cold case of Brandon Taylor, a case that hits too close to home for influential people in Mississippi.

Sheriff Quinn Colson has a few allies in law enforcement in Mississippi. However, if the story of one young sheriff taking on corrupt officials and criminals reminds you of "Walking Tall", you're not alone. Atkins' series is an atmospheric, scary set of books, all too plausible right now. And, when The Shameless leaves the reader dangling, it makes the story all the more frightening.

I read the first book in the series, and recently came into 4 or 5 others.

Like you, Glen, I read the first in the series, and, for some reason, not the others, although I liked it. I will be reading the sequel to this one, though, because I already want to know what happens.

I became a fan of this series when I somehow managed to snag an ARC of the first one for review purposes. I was immediately hooked on the characters and setting. I do love the series, but all that said, I absolutely hate it when a book ends on a super-dramatic cliffhanger and I have to wait a whole year to find out what happens next. By the time the next one comes out, I'm fairly hazy on the details from the previous one and the sequel necessarily loses some of its potential impact.

One of my all time favorite series. I have read all but one - somehow I missed the third on. Quinn is a terrific character and his righteous indignation over crime gets him into so much trouble. Atkins should do everyone a favor and bring out the next one sooner than next July.

Sam and Netteanne, I agree. Atkins and his publisher should bring the next book out sooner than a year from now.