The Pawful Truth by Miranda James 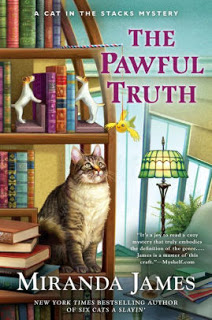 There are some mystery series whose characters are the draw as much as the plot, maybe more so. I was willing to overlook Robert B. Parker's minimalist mystery plots in his final Spenser books because I loved to read about Spenser and Hawk. I feel the same way about Miranda James' Cat in the Stacks books. While I understand what happened in The Pawful Truth, a mystery set in the world of academia, I wasn't really very interested in the love triangles. It's Charlie Harris and Diesel, Charlie's Maine Coon cat, and Charlie's family and friends, including all the people who have come to be family, that draws me to these books.

This semester, Charlie's auditing a class in medieval history. He's heard great things about Dr. Carey Warriner's class. He's amused by the reactions of the female students to the handsome professor, but he's riveted by Dr. Warriner's delivery. But, the only other mature student, Dixie Belle Compton, almost runs Charlie over to get to Dr. Warriner after the class. Charlie's delayed long enough to hear the professor ask her "What the hell are you doing in my class?"

Of course, Charlie is nosy, so he feels bad when he turns Dixie Belle down when she asks to be his study partner. He feels even worse when Dixie is found murdered. Rumors run wild through the academic departments at Athena College. There are stories about Dixie, rumors that Dr. Warriner and his wife, an English professor, are both having affairs. And, Charlie is present when Dr. Warriner has a run-in with another professor.

Usually, Chief Deputy Kanesha Berry wants Charlie to stay out of her cases. But, she acknowledges he has an in at the college that she doesn't. She asks him to keep his ears open. Then, the two doyennes of Athena, Miss Dickce and Miss An'gel Ducote, ask him to investigate. As board members at the college, they want everything cleaned up. And, Miss Dickce isn't above playing Nancy Drew to Charlie's Hardy Boys.

The solution to the crimes is actually quite convoluted, but before the end, a number of professors are entangled in the web of suspicion. Charlie himself is almost caught up in the trap. Fans of academic mysteries will appreciate the atmosphere and setting.

However, fans of Charlie and Diesel are the real winners with this book. Everyone we've grown to love is present, from Charlie and Diesel and the new kitten, Ramses, to Charlie's children and grandchildren, his housekeeper, Azalia, her daughter, Kanesha. Of course, his beloved Helen Louise is involved, and his renters, Stewart and Haskell are there when it counts. And, this time, Miss Dickce and Miss An'gel have roles as well.

Miranda James' books may be cozy mysteries, but the readers who have followed this series for years know the books are really about love, love of family and friends. Charlie has grown over the course of the series because of the growth of love in his life. Sometimes, the mystery is overshadowed by the characters. In the case of The Pawful Truth, that's a good thing.