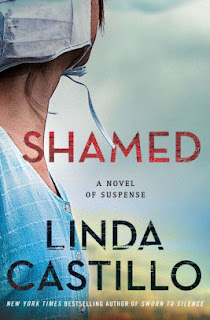 I love Linda Castillo's Kate Burkholder books. She has wonderful characters, beginning with Kate, Kate's love interest, Tomasetti, and the entire police department in Painters Mill, Ohio. But, the cover of her latest book, Shamed, is just wrong. Let me get that out of the way right up front, so I can move on to the book itself.

Look at that cover. If you were in the library, or a bookstore, you would pick it up if you read Amish novels. And, you'd be offended by the violence in the book. If you're a mystery reader, you would not pick it up. It looks too much like a nice, clean Amish book. And, it certainly doesn't look like the other books in Castillo's series. In fact, one friend said he thought Castillo must have switched genres. No, this is a Kate Burkholder suspense novel. But, the cover artist, the editor, and the publishing company made a mistake, in my opinion. Or, were they trying to mess with readers' minds, as someone suggested?

Castillo's books always introduce you to the victim, which draws readers into the story immediately. In this case, an Amish grandmother has taken two of her grandchildren, five-year-old Annie, and seven-year-old Elsie, to a favorite spot, a deserted farm, to gather walnuts. It's a fun outing, until the grandmother enters the old farmhouse, and is butchered. Elsie, a child with special needs, is kidnapped, and Annie is left, covered in blood.

When Kate Burkholder is called to the crime scene, she finds Annie and hears a story that "Da Deivel", the devil, did that to Annie's grandmother. Although law enforcement departments from all over respond to the case, due to a missing child, Kate deals with the family because she was once Amish. It's one of the children in the family who accidentally blurts out a sentence. As Kate ponders it, she realizes there are secrets behind Elsie, and the family isn't telling the truth about their missing daughter.

As Burkholder's investigation goes on, hour after hour for a missing child with special needs, she is shocked to learn of events seven years earlier, and to hear stories of the people involved. Deaths mount, shots are fired, and Kate Burkholder finds herself cornered by a killer.

Believe it or not, that last sentence is not a spoiler. There's so much more to this meaty book. But, it's violent. And, one of the events shakes Kate, as it will any reader of the long-running series. It's another gripping book in a series that is suspenseful and compelling. (And, no matter what the book cover indicates, it's not a sweet, cozy Amish story.)

Totally agree with all you said here, Lesa. I love this series, but I had the same thought about the cover. Not a 'sweet' Amish book at all. This one was very good!

I am waiting for the library to let me know my copy is ready.

As to Kate being cornered by a killer, that happens in almost every book in the series!

Thank you, Kay. I actually let a publicist at St. Martin's know my thoughts because the cover just didn't work for me.

So true, Jeff. Love the series, though.

A cover can make or break a book. I wonder what they were thinking?

I don't know, Glen. They did reach out to me today. If they had at least put a trickle of blood coming down, it would have made a difference. I just think it makes it look too much like a sweet Amish story. We have tons of people who like those at the library, but it's usually not the same audience for Linda Castillo's work.

Heck of a read. They totally blew it with the cover.