Marah Chase and the Conqueror's Tomb by Jay Stringer 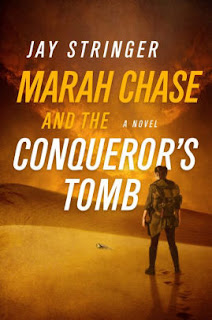 "An archeologist and a spy walk into a bar..." If that caught your attention, you're a good candidate for the action-packed page turner, Marah Chase and the Conqueror's Tomb by Jay Stringer. If you're a fan of James Bond, Indiana Jones or the television show "The Librarians", or any adventure novel or comic with gutsy protagonists, you might want to try this one.

Marah Chase now puts her background as an archeologist to use as a treasure hunter or grave robber. She's one of a handful of experienced professionals who can name their price. She's a "relic runner" who justifies her actions saying she's saving relics and treasures from war, bombs, climate change. She might be putting them in the hands of collectors, but they're saved for history. She can steal a motorcycle to escape mercenaries in the Syrian Desert, but, when she's arrested in Israel, it's hard to run from an adventure and a good-looking spy.

Joanna Mason is with MI6. She offers Marah an opportunity. Find the location of Alexander the Great's tomb, and a buried secret weapon that is coveted by a group called the Church of Ancient Science. The Visitologists were formed in the 1950s, believing that humanity was mentored by ancient aliens. Now, they're buying property to excavate ancient sites as they look for evidence of ancient technology or alien visitations. Mason believes there's a powerful weapon buried in Alexander the Great's tomb, and the Visitologists are determined to own it. Joanna wants Marah Chase to find it first.

Marah knows she'll have to dig into her own past, and reunite with her former lover, Zoe Forrester. Chase was a student recipient of money from the Forrester Foundation, started by Henry Forrester, Zoe's great-grandfather, a man obsessed with Alexandria, and the search for Alexander the Great's tomb. His journals may reveal clues, but Marah will only be able to access them with Zoe's help.

Treasure hunters, spies, smugglers, religious zealots. It's a race to Alexandria to find a weapon. It's a desperate quest to save the world, beginning with London. It will take two kick-ass women and an unforgettable smuggler to travel through tunnels and tombs, fight off killers and mercenaries, survive car, motorcycle and plane chases, all to attempt to save the future of the world.

"We might get to save London from destruction and stop World War Three." That's what happens when "An archeologist and a spy walk into a bar." Love adventure? Check out Marah Chase and the Conqueror's Tomb.

I put it on my library list under "female 'tecs"