Killer in the Carriage House by Sheila Connolly 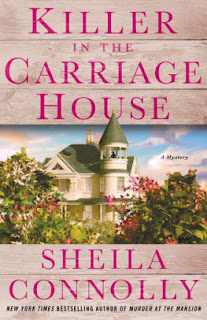 Although Kate Hamilton, the amateur sleuth in Killer in the Carriage House, comes across as distracted, I was wondering if the author, Sheila Connolly, was distracted when she wrote this latest mystery. I know I had an ARC, so I won't mention errors I found in the text. Those are acceptable in any ARC. But, the murder itself doesn't take center stage in this latest book. It almost seems like an afterthought, a body and murder easily forgotten.

In Murder at the Mansion, Kate's best friend from high school, Lisbeth Scott, begged her to return home to Asheboro, Maryland. The town is in decline, in desperate straits, and Lisbeth wants Kate's suggestions as to how to turn it around and make the small town thrive again. Kate suggests the townspeople and shop owners try to turn the central blocks into an authentic Victorian village, capitalizing on the Barton mansion on the outskirts. It's going to take money the town doesn't have, but Kate hopes there are documents that might help them find financial backers for the renovations.

Kate is working with historian and professor Joshua Wainwright, who is an expert in 19th century industrialization. Together with a researcher, they drag documents from the Barton mansion, storing them in the closed public library. But, once they remove the boxes to the library, Kate is interrupted there by a young man who begs to use the library's resources. Kate's a little suspicious, and she tells him to talk to the people at the town hall. The next morning, Kate and the researcher, Carroll, find the young man's body in the library. It appears as if he broke in, but both women suspect murder.

Let me preface the following remarks by saying I loved Murder at the Mansion and the concept of renovating an entire village. The first documents came as a surprise to me. At the point of the murder, though, this second book seems to go off course. Although there was a murder, everyone seems more interested in solving the mystery behind Henry Barton, owner of the town's shovel factory and the Barton mansion, than finding a killer. In fact, the murder seems minor, and there's little development of the victim, so the reader cares as little as the amateur sleuth does. The murder doesn't occur until one third of the book is over, and it seems incidental to the plot. The main plot is the need to develop Asheboro and find documents to support the renovation of the town.

Kate Hamilton bumbles her way through the book, and through town meetings that open and close the story. She's not confident. She gets ahead of herself in the planning, and never does organize her plans. Although she has an academic and a researcher with her, she doesn't follow through with her own plans to do research. She over explains herself to others, telling them about her relationships, while trying to hide the documents. In fact, she comes across as someone who hasn't put a lot of thought into her next steps.

I want to like this series. I want Asheboro to thrive. I love history, and the search for answers for this town. But, Killer in the Carriage House succeeds only for those of us who enjoy history. It won't succeed for readers who are interested in the murder mystery.

I really enjoyed the first book too. I think I will skip this one and maybe the third will be better. I will stick to the County Cork stories until then.

I thought the first in this series was terrific, Gram, fresh, and I never saw the connection coming at the end. This one was puzzling to me.

I’m getting it from the library so I’ll give it a try. Fortunately the library doesn’t require me to finish everything I try.

And, if you feel differently when you read it, Sandy, I hope you say so on a Thursday, or come back and comment here. I'm always interested to see other reactions.