Have You Heard? - Miranda James' Classified as Murder

Miranda James' eleventh Cat in the Stacks mystery, The Pawful Truth, is due out Tuesday, July 16. If you love Charlie Harris and his Maine Coon cat, Diesel, as I do, you'll be waiting for the new book. 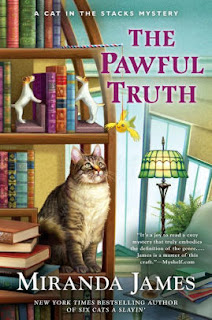 In the meantime, Sandie Herron has reviewed the audiobook of the second in the series, Classified as Murder. It might serve as an introduction to the series, or a refresher, if it's been a while since you read one of the books. Thank you, Sandie.


Classified as Murder
Series:  Cat in the Stacks Book 2
Written by Miranda James 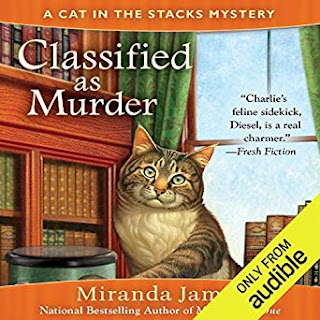 Librarian Charlie Harris is working at his volunteer job at the library in Athena, Mississippi when an elderly gentleman asks for his assistance in finding a particular book.  As they chatted, James Delacorte revealed that he had a sizable book collection and invited Charlie to view it and have tea with his family.
Meanwhile, Charlie's son Sean arrived looking to stay a while. Sean seemed angry and aloof, keeping to himself with his poodle Dante.  Charlie needed to determine why his son had returned home.

James Delacorte had a variety of family members living with him.  While James had never married nor had children, his brother and a mixture of nieces and nephews lived in his home.  Charlie went to the Delacorte mansion for tea where he meets the family, who revealed a number of odd behaviors and traits.  For instance Eloise was, at the moment, out of touch with reality wearing an antebellum gown and talking of eating cookies with Uncle James.

James wanted Charlie to check his book inventory and determine if all the volumes were present.  James was certain that someone was stealing from him.  In addition, he had found several books out of place.  Charlie was vacationing from his Athena College job, so he returned to the Delacorte home the next Monday, ready to start.  James explained his chronological method of filing the books: the first book he ever bought was the first on the shelves, and so on.  The two men began, but lunchtime came quickly.  While invited to dine, Charlie went home to eat so he could visit with Sean.

Upon Charlie's return to the Delacorte library, he found a very dead James.  Within a day or two, Charlie discovers that he was named co-executor of the Will and that he was to continue reviewing the library.  Each family member behaved poorly as the Will was read.  It would be up to the deputy sheriff to follow the clues to James’s murder.

When Charlie returned the next day, Sean went with him to assist.  Finishing the inventory became of utmost importance when they discovered a dozen rare, signed first editions were missing.  Clues and another death occurred, leading the deputy and Charlie in different directions.  Even Diesel helped reveal one key factor.  Our professional and amateur sleuths worked together much more cordially than in the first book in this series. This entry was more relaxed and more enjoyable.

I wouldn't want to steal any fits of laughter you might experience while reading, but I can say that narrator Erin Bennett did a wonderful job with many accents and volatile events.  It was also nice to learn more about Charlie and his life of the past several years, including where Diesel had come from.  The pace was steady and full of twists and turns.  I was even surprised when I reached the end of my very enjoyable visit to Athena.  I look forward to my next visit with Charlie and Diesel.